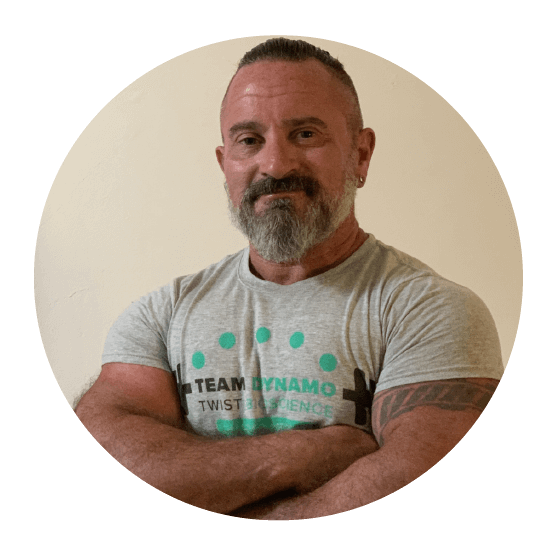 What was your path to Twist?

I started at Intel back in '92. My manager likes to joke I spent the first 25 years wasting my time at Intel before coming to Twist. I helped set up Intel's first employee group, the Intel Gay and Lesbian and Bisexual Employees Organization. When we formed it, we also created the infrastructure for employee groups at Intel. I've been in biotech for 10 years, starting at Intel, and then segueing into my work at Twist.

How does Twist compare to Intel in acceptance?

For support and diversity, both companies are up there. I've always been impressed with what Intel's done. We started changing the culture early on, and even when I left, it was fantastic. The company has its own Intel logo Pride flag that it flies during Pride month. That's one of the reasons I felt comfortable moving over to Twist. I found that same level of support and enthusiasm and welcome-ness.

How does your identity impact your work at Twist?

I've always felt comfortable being out at Twist. It has never been an issue. I’ve never felt uncomfortable bringing up my partner or my family structure, any of that. Around 20 years ago, a queer friend of mine and I decided to co-parent a kid together. This was new ground. We weren't coupled, we were both single, and we both decided we wanted a kid and ended up raising a son together. He’s now in college at Pomona.

It's a pattern that doesn't exist in the heterosexual community. It doesn't really exist in the queer community, either. But it's gone really well. We have a great family structure and supportive friends. So as far as identity, I’m a gay dad who was never having kids in a marriage, who made the choice to do that with a queer partner.

When did you come out?

I came out at the beginning of the AIDS epidemic, which changed a lot about me and the culture of people around me. It's great that HIV is no longer a death sentence, but one of my best friends in San Francisco has been pushing awareness of how long-term HIV survivors are dealing with healthcare, and other issues, as they get older. It’s a big deal, because most people with HIV are over 50 now.

That’s unique to my generation – a lot of people lived through this awful period, and we're still carrying it. Those years inform a lot of what I think of as my own identity.

Anything you enjoy doing for fun?

I have a go-go dancing gig on the side I do every couple of months. A friend of mine was about to turn 50, and someone asked: What are you going to do for that? So, we set up this first party, and have been doing them about every three months. They’re geared around this core group of men who were the first early survivors of the AIDS epidemic. There’s not much in the way of celebrations for these guys because, basically, we all died.

In many ways, the AIDS crisis gave the impetus for so much to be visible. We were forced to advocate for our rights. As horrible as it was, I don't know if we'd be here without it.

How do you perceive the overall culture today?

But now, it's pretty amazing. It happened much faster than I ever expected, especially the transition to marriage rights. It also corresponded with a change in public attitudes, which I think is the more important transition. The two go hand-in-hand. You don't get that change in the social environment until there's enough visibility for people to actually recognize people and care about them. But once that visibility started happening, it happened fast.