Twist Bioscience is sponsoring the iGEM team representing Makerere University in Uganda, who are tackling the biodegradation of plastic.
Twist Bioscience
5 min read

For many, iGEM is their first foray into the world of synthetic biology, providing expert training and kicking off their careers as young scientists. Each year the competition culminates in the four-day Giant Jamboree, a huge scientific celebration that sees more than 3,000 young synthetic biologists converge on Boston, Massachusetts. Here, teams present posters, scientific lectures and live demonstrations of their work, as they all vie to achieve medals for their efforts and win the coveted iGEM trophy.

This year, Twist Bioscience is sponsoring the iGEM team representing Makerere University in Uganda, who are undertaking an ambitious project based around the biodegradation of plastic. We recently had the opportunity to speak to the team in more detail about their project, and their experiences so far at iGEM.

iGEM Makerere 2018 is a team of 15 students from Makerere University in Kampala, Uganda, led by their instructor, Otim Geoffrey, a Medical Laboratory Technologist at the Uganda Virus Research Institute, and a Masters fellow at Makerere University. Otim Geoffrey has been involved with synthetic biology since attending SB7.0 in Singapore as a Biosecurity Fellow in 2017. There, he met with many thought leaders in the field, including Kim de Mora, the former Director of Development at iGEM headquarters.

“When I came back from Singapore I discussed the field with the students, lecturers and professors. We are now working towards establishing a center for synthetic biology research at Makerere, and have started an iGEM team,” Otim Geoffrey explained.

We were able to speak with the team about their experiences in the competition so far. They answered collectively as a team, demonstrating  the strong team ethos upheld by iGEM. For your reference, the students’ names are listed at the bottom of this blog.

The team explained how, after hearing about iGEM from Otim Geoffrey, they wanted to be involved with big practical science experiments that solve emerging challenges in their society. “We are a team of young and enthusiastic synthetic biologists seeking out solutions for environmental challenges here in Uganda,” they said in a statement. “We are determined to use synthetic biology to create both a better Africa and a better world.” 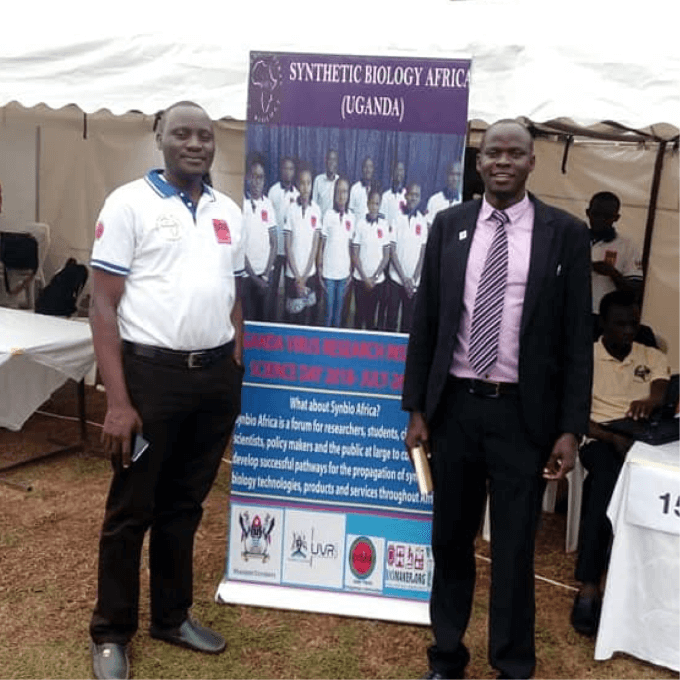 Otim Geoffrey MSc (right), Instructor for the Makerere University iGEM team at an open science day at the Uganda Virus Research Institute, with Katumba Alex, a member of the SynBio Africa team.

Their project is focused around genes from the unusual bacteria Ideonella sakaiensis. We recently discussed this bacteria in our blog. Isolated from a plastic recycling plant in Japan, this species of bacteria has recently developed enzymes that allow it to use plastic as a food source. It is hoped that I. sakaiensis and its plastic degrading proteins will help solve the global plastic crisis - an effort the Makerere iGEM team are keen to push in their country.

“Plastic waste is a big issue here in Uganda. Polyethylene terephthalate (PET) plastic is the most common plastic used by beverage companies, and their products litter our environment. We spoke to our communities, and found that plastic waste is a huge problem in urban and peri-urban areas around Uganda,” the team explained, discussing the motivation for their project.

Such plastic also clogs up sewage systems, and toxins from the plastics are released into the ecological systems that Uganda uses for food. Sometimes, people burn waste plastic which creates noxious smoke, causing further damage. Makerere’s iGEM team hope to find a solution to this pollution, which would be green and then turn the waste plastic into something useful.

The team’s solution takes the plastic degrading genes from I. sakaiensis, and introduces them into the easily engineered and cultured lab bacteria E. coli. They then aim to link this to a system that converts the byproducts of plastic degradation into biofuel. Their proof of principal will first look at two key genes from I. sakaiensis - an esterase known as PETase, and a lipase known as MHETase.

“Before we get to the Giant Jamboree, we are planning to have engineered our bacteria, and produced the preliminary data showing that it can degrade PET plastic into useful fuels. More importantly, we want to have engaged with the people of Uganda and introduced them to synthetic biology,” they said. An important part of iGEM is public engagement and outreach. Successful projects should ensure that the opinions and feelings of the stakeholders in the team’s project are both considered and integrated into the project’s design. 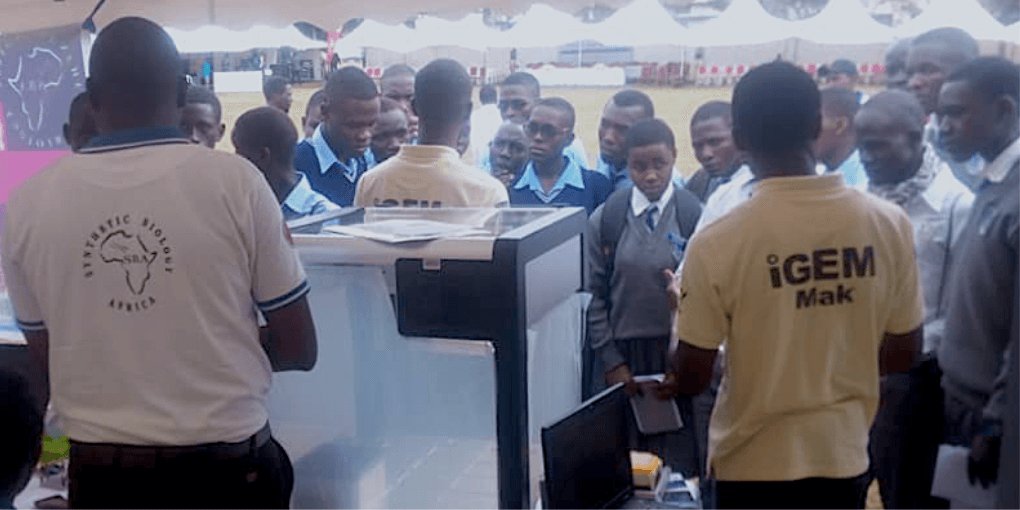 “For Africa, synthetic biology is a newly emerging field - we are its pioneers in our institution, our country and our region of East Africa. This has made it essential for us to engage with our community about our project and the field of synthetic biology, discussing how the field could have potential benefits to humans, animals, plants, microorganisms and to the development of our economy as a developing nation,” the team explained.

Makerere iGEM has also launched the Synbio Africa initiative. This is the very first synthetic biology community in Africa. It brings together scientists, researchers, policy makers, students and the wider community to discuss and embrace the benefits of synthetic biology. The team hopes that this community will enable synthetic biology to be propagated throughout Africa, along with its potential benefits.

They finished by sharing their reflections for the future of synthetic biology in Africa. “By the time we have presented at the competition and brought home a medal, we hope that we have been able to expose our community to synthetic biology, leaving them with positive perceptions of the field,” they said. “We believe that this is only the beginning of the field in our country, and we are excited to share our project, and its potential benefits with the world.”

We at Twist Bioscience are really excited to see what the team members have achieved when they present at the Jamboree in late October.

Special thanks to the Makerere iGEM team, and their instructor Otim Geoffrey, for answering our questions, and providing us with all the images in this piece.