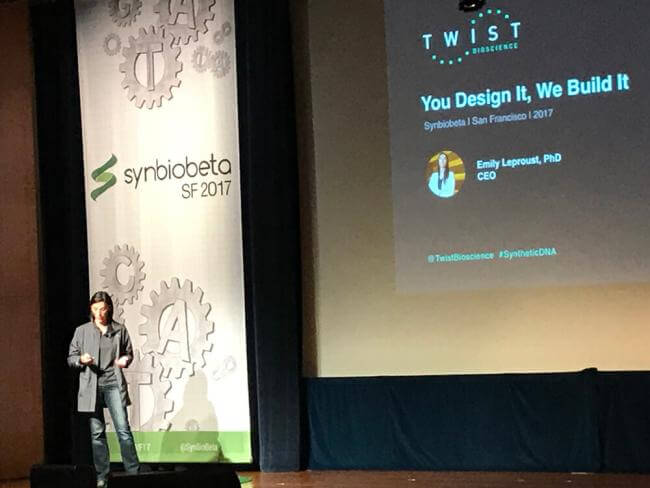 Twist Bioscience marked the gathering of leaders of the synthetic biology world at the SynBioBeta conference Oct. 3-5 with several eye-catching breakthroughs in the field. At the San Francisco event, we announced we’re going to supply Ginkgo Bioworks with one billion base pairs of synthetic DNA, the largest volume of base pairs in industry history; we showed how we encoded two historic music performances in DNA; we unveiled a new online ordering platform and noted that we’ve shipped more than 136,600 genes.
Emily Leproust, CEO of Twist Bioscience, said the company is executing its strategy of leveraging its silicon-based DNA synthesis platform to provide low cost, high-quality genes that would otherwise be unavailable to customers. “Our goal is to bring precision at scale for DNA synthesis,” Leproust said. “Now we’re seeing more and more successful implementations of that plan. Our customers are enjoying the results through better prices, better quality and high-throughput of our genes.”
IB Base Pairs Earmarked for Ginkgo
Ginkgo will use one billion base pairs of synthetic DNA from Twist Bioscience for work in its newest automated foundry for organism design, Bioworks3. The foundry will be used in part by a new company that Ginkgo and Bayer recently launched with $100 million in funding focused on nitrogen fixation for sustainable agriculture. This supply of synthetic DNA will also fuel Ginkgo’s continued expansion into new industries for a wider breadth of companies to leverage the power of biology in their lines of business.
Twist Bioscience has been working with Ginkgo Bioworks since November of 2015, when the companies announced an agreement for Twist Bioscience to deliver a minimum of 100 million base pairs of synthetic DNA in 2016 — a quantity equal to approximately 10 percent of the total DNA synthesis market in 2015. Ginkgo is the largest consumer of synthetic DNA globally, and with this supply expansion, it is expected to order the equivalent of the annual global supply of synthetic DNA.
“We are thrilled to enable Ginkgo’s exponential expansion as we are the only provider of synthetic DNA capable of supporting their rapidly increasing DNA needs,” Leproust said. “Our ongoing collaboration, pairing Ginkgo’s tremendous organism design capabilities and Twist Bioscience’s core DNA synthesis scalability, showcases the growth of the bioeconomy by enabling the development of sustainable methods for producing new and important consumer goods.”
Online Ordering Reimagined
On the conference’s center stage, Leproust outlined Twist Bioscience’s new online ordering platform. “With this tool, customers can easily enter their order at any time,” she explained. “It’s always on. We build it to be intuitive, frictionless and beautiful, and the modern way to clone will become logging in on twistbioscience.com/shop".
Burgeoning Demand for Genes
Twist Bioscience has shipped more than 136,000 genes over the course of doing business, Leproust announced at the conference, adding that the number is just a starting point. As possible applications for synthetic DNA are developing at a fevered pace, demand for the genes is mushrooming.
“The present number of genes shipped is for 200 customers thus far, but there are 20,000 users in the U.S.,” Leproust said. “We’re just scratching the surface.”
Encoding Music on DNA
Bill Peck, CTO and co-founder of Twist Bioscience, took the stage at SynBioBeta to announce that Twist Bioscience, working with Microsoft and University of Washington researchers, had successfully stored archival-quality audio recordings of two important music performances from the archives of the world-renowned Montreux Jazz Festival.
Peck said these selections are encoded and stored in DNA for the first time and these tiny specks of DNA will preserve a part of UNESCO’s Memory of the World Archive, where valuable cultural heritage collections are recorded. “This is the first time DNA has been used as a long-term archival-quality storage medium,” Peck said.
In this proof-of-principle project, two quintessential music performances from the Montreux Jazz Festival – Smoke on the Water, performed by Deep Purple and Tutu, performed by Miles Davis – have been encoded onto DNA and read back with 100 percent accuracy. After being decoded, the songs were played on September 29th at the ArtTech Forum in Lausanne, Switzerland, where Peck presented the historic event.
Smoke on the Water was selected as a tribute to Claude Nobs, the Montreux Jazz Festival’s founder. The song memorializes a fire and Funky Claude’s rescue efforts at the Casino Barrière de Montreux during a Frank Zappa concert promoted by Claude Nobs. Miles Davis’ Tutu was selected for the role he played in music history and the Montreux Jazz Festival’s success. These recordings were archived by Montreux Jazz Digital Project, a collaboration between the Claude Nobs Foundation, curator of the Montreux Jazz Festival audio-visual collection and the École Polytechnique Fédérale de Lausanne (EPFL).
Quincy Jones, world-renowned Entertainment Executive, Music Composer and Arranger, Musician and Music Producer who has a long-standing association with the festival, enthusiastically endorsed the project. Said Jones: “It absolutely makes my soul smile to know that EPFL, Twist Bioscience and others are coming together to preserve the beauty and history of the Montreux Jazz Festival for our future generations, on DNA!”