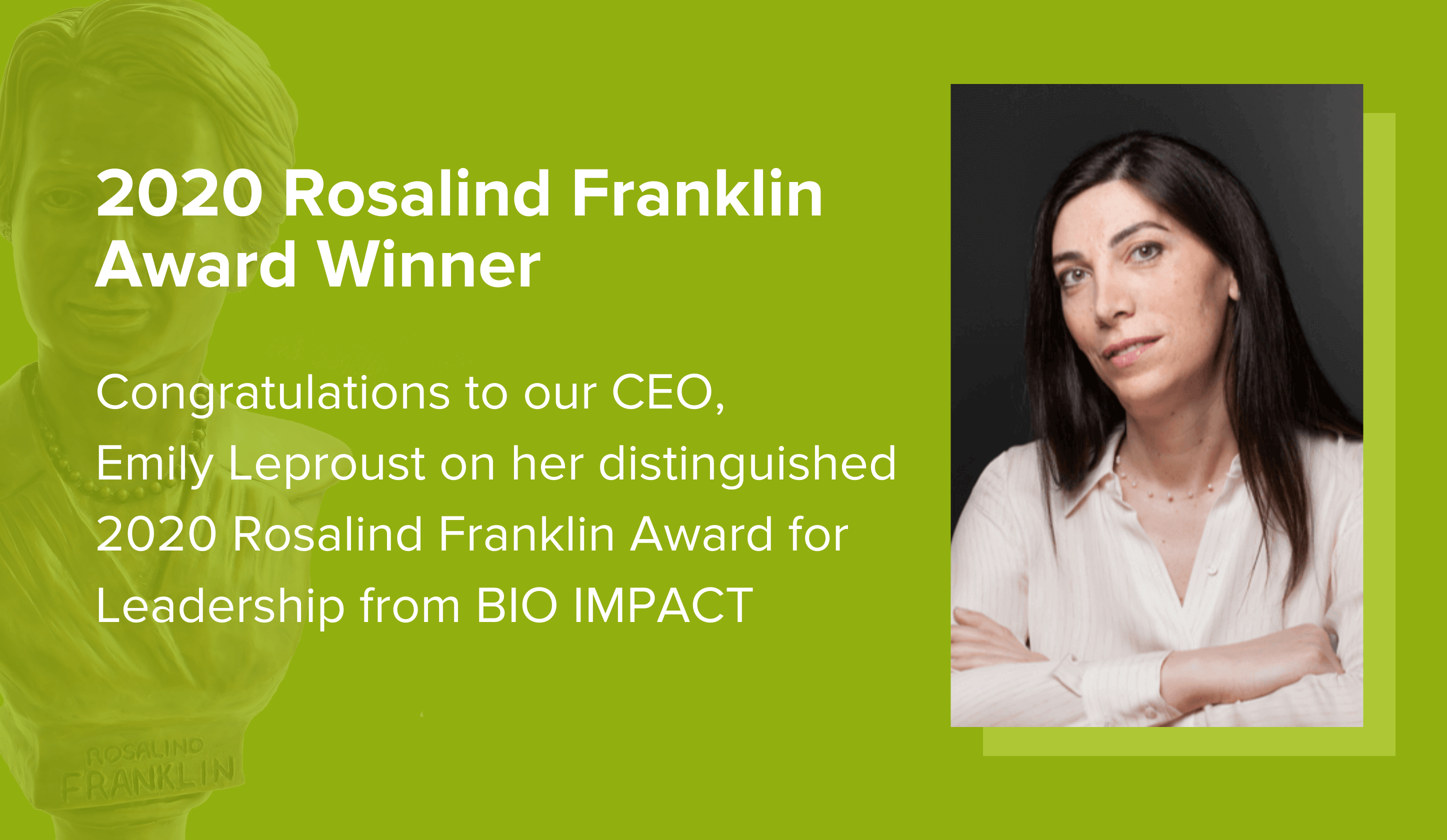 Twist Bioscience’s CEO and co-founder, Dr. Emily Leproust has been awarded the BIO Rosalind Franklin award, recognizing her as a pioneering woman who has made significant contributions to the biobased economy and biotech innovation. “It is a great honor to receive the BIO Rosalind Franklin Award, particularly in 2020, the year she would have turned 100,” said Dr. Leproust. “At Twist, we stand on the shoulders of giants like DNA pioneer Rosalind Franklin, advancing DNA-based products to write the future of chemical, medical, food and even data storage.”

Dr. Franklin was a British biophysicist and X-ray crystallographer who earned her Ph.D. in 1945 from Cambridge University. Her work led to the discovery of the double-helical structure of the “B” form of DNA, which has since paved the way for the field of molecular biology as a whole. The discovery of DNA structure proved critical for studying how genetic information is passed from generation to generation. Her X-ray diffraction photos were highly influential in the 1962 Nobel Prize for Physiology and Medicine awarded to James Watson, Francis Crick, and Maurice Wilkins.

After finishing her DNA structure work, Dr. Franklin went on to study the tobacco mosaic and polio viruses. She died in 1958 at the age of 37 from complications of ovarian cancer. Although Dr. Franklin was not appropriately recognized at the time for her groundbreaking discovery, it is becoming more widely known that it was her initial work that led to the discovery of the double-helical structure of DNA.

It is in this context that since 2014, the Biotechnology Industry Organization (BIO) has awarded the BIO Rosalind Franklin Award annually to honor pioneering women in the industrial biotechnology and agriculture sectors. Past awardees include:

This year, Emily will be awarded the 2020 BIO Rosalind Franklin Award for leadership at the BIO IMPACT Ag & Environment Conference. Emily has dedicated her career to using synthetic DNA to improve health and sustainability. She was inspired to enter the field of DNA synthesis as she likes to solve hard problems and explains, “Science is a problem that you cannot solve, but the deeper you go, the more we find we do not know.”

Twist is proud to congratulate Emily for this remarkable achievement!

Emily earned her Ph.D. in Organic Chemistry from the University of Houston, where she worked with Dr. Xiaolian Gao, developing DNA and RNA parallel synthesis processes on solid support. Prior to co-founding Twist Bioscience, Emily held escalating roles at Agilent Technologies, where she architected the cost-saving SureSelect sequencing product line which contributed to the discovery of mechanisms responsible for dozens of Mendelian diseases. She also developed the Oligo Library Synthesis technology and other commercial synthesis platforms to streamline microarray manufacturing and fabrication.

In 2015, Emily was named one of Foreign Policy’s 100 Leading Global Thinkers for fast-tracking the building blocks of life. Fast Company named her one of the most creative people in business for rapidly synthesizing DNA. She has published over 30 peer-reviewed papers and is the author of numerous patents.

In addition to her position at Twist Bioscience, Emily has also joined the board of CM Life Sciences, a company who focuses on delivery high-quality recruitment and consulting, and is a co-founder of Petri, a company that provides custom-fit resources and support for startup ventures in the intersection between biology and engineering.