In a recent study published in the journal Cancer Cell, by Lorenzo Brunetti MD PhD and colleagues at Baylor College of Medicine in Houston, Texas, a new potential treatment target for AML was discovered. The study used gene editing and gene insertion to identify the new target. In their approach, the team utilized Twist Bioscience gene fragments as linear gene insertions into mouse cells. This tool helped the team identify how treatments involving their identified target can improve the survival of mice with AML, and improve rates of myeloid differentiation.

In late 2017, Chris Betancourt discovered that his leukemia had returned. In relapse, his only option was to find a bone marrow donor - an unlikely person who is a perfect match for a transplant. It was at this time Betancourt curated a bucket list of things he wanted to achieve during his life. His best friend, Dillon Hill, dropped out of UC Davis to help Betancourt fulfil this list and the pair went viral by documenting their activities online. Some of their adventures include: breaking a world record, getting tattoos, participated in a pillow fight flash mob, and visited SpaceX. Betancourt has since found an eligible bone marrow donor, and passed the baton of his One List, One Life website to Lexi Evarts, another cancer fighter with a bucket list.

Approximately 10% of new cancer cases in 2018 in the U.S. are expected to be cancers of the blood like Betancourt’s. Acute Myeloid Leukemia (AML) is one of the most common cancers of the blood, accounting for about 1% of all cancers with almost  20,000 estimated new cases of the disease diagnosed in the U.S. in 2018. “Acute” means the disease progresses rapidly, with severe symptoms showing almost immediately without treatment.

In  bone marrow, myeloblasts (also known as myeloid blasts) mature into either monocyte or granulocyte white blood cells in a process called differentiation. AML is caused by mutations in myeloblasts that lock the cell into a pre-differentiation state. Additional mutations in the cell’s control centers for proliferation then lead to the acute leukemia. Large numbers of undifferentiated myeloblasts accumulate in the bone marrow, leading to anemia, a significant reduction in a patient’s white blood cell count, and a loss of blood platelets. A leukemia patient will have low energy, bruise easily, and be highly susceptible to infection. 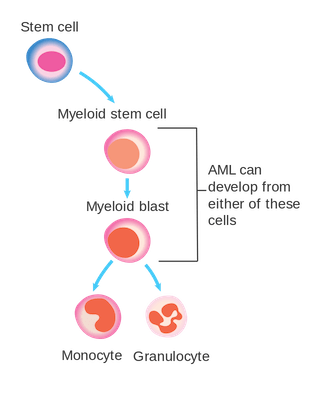 The cells in which AML can develop. Source: Wikicommons. Image licensed under CC BY-SA 4.0

NPM1 encodes the protein nucleophosmin. This multifunctional protein is involved in genome stability, ribosome biogenesis, the transport of mRNA and chromatin formation. Research has shown NPM1 is the most commonly mutated gene in AML patients, with the most commonly mutated part of the protein being responsible for its localization inside the cell. While nucleophosmin is usually found in the nucleolus of healthy patient cells, it is often found in abundance in the cytoplasm of AML patient cells.

NPM1 mutant AML cells also have an unusually high expression of a gene family called HOX. These HOX genes control the transcription of other genes and the link between nucleophosmin mislocalization - HOX gene expression - and AML was a key question the researchers in the paper  hoped to answer.

By using the precise gene editing tool CRISPR, the researchers targeted the mutated part of the cytoplasm localizing NPM1 gene in a lab population of AML patient myeloblast cells. Specifically, they targeted a sequence that controls the export of the protein from the nucleus. When removed, nucleophosmin localized to the nucleus, and the researchers observed that cells were then able to differentiate. This showed that maintenance of the leukemic phenotype was controlled by the mislocalization of NPM1.

The researchers then aimed to revert the cytoplasm localizing mutants of NPM1 back into nucleolus localizing mutants, again using CRISPR, alongside homology directed repair (HDR). HDR uses linear strands of DNA homologous with the flanking sequences of the CRISPR cut site to integrate new genetic information into specific genetic locations. Using Twist Bioscience’s gene fragments, homology templates were synthesised containing the nucleolar targeting sequence and a fluorescent marker was used to confirm successful integration of the new genetic information. Twist Bioscience’s gene fragments are perfect for such HDR experiments as they are delivered with exceptionally low error rates at an industry leading price as well as a quick delivery. Successful HDR was achieved with the fragments, and the researchers confirmed this led to complete recovery of myleoblast differentiation.

Bone Marrow cells from an AML patient. In the image, defective myeloblasts contain long purple rods, which are aggregated cellular components. These rods are sought as part of an AML diagnosis. Source: Wikicommons. Image licensed under CC BY-SA 3.0.

Importantly, the high accuracy of Twist Bioscience’s gene fragments provides researchers with peace of mind that their newly integrated genetic information is highly accurate to their design specifications. Using the same method as before, the researchers then used Twist Bioscience gene fragments to test other localization tags that possessed varying efficiencies, showing that the higher the nucleophosmin localization ratio swings towards the cytoplasm, the less the cells are able to differentiate, providing more clear evidence that cytoplasmic nucleophosmin is the key driver behind the loss of differentiation in AML.

The article’s authors then assessed how the expression of other genes is changed when cytoplasm localizing nucleophosmin is re-localized to the nucleus using next generation sequencing. They observed that over half of the genes that were downregulated were the HOX genes. They explained how its has been shown in previous research that HOX genes are regulated by chromatin state (the density of DNA packing by histones). A histone that is a known enhancer of gene expression was observed to be downregulated when nucleophosmin localized to the nucleus, implicating nucleophosmin in the reduction of HOX expression. The researchers further explained how changes to HOX gene expression are essential for inducing many cancer properties by changing gene expression throughout the cell.

The data shows that nucleophosmin suppressed HOX controlled expression in a chromatin dependant manner. When nucleophosmin re-localizes to the cytoplasm, HOX genes can run rampant, causing leukemia. To circumvent cytoplasmic nucleophosmin localization, the researchers hypothesized that using an inhibitor of nuclear export would increase nuclear nucleophosmin concentrations even if NPM1 has the cytoplasm targeting mutation. This  shows that treatment with an export inhibiting drug reduced HOX expression, recovers differentiation in AML cell lines, and significantly prolongs the survival of leukemic mice. If transferred to patients, the progression of their disease could be slowed, providing more time for treatment.

Fortunately, as Betancourt’s story shows, leukemia is already a treatable disease, with success rates of over 80% for some patients. Prognosis is largely directed by the nature of the mutations a patient has accrued. Some mutations are far more likely to lead to successful treatment, and less likely to lead to remission. In remission, the only treatment course is a stem cell transplant, which has over an 80% chance of success in some patients if they maintain remission within two years of receiving the transplant.

To push these survival numbers up, many other trials for disease treatment are being researched. These include antibody therapies, new drug treatments, and the discovery of new drug targets for treatment. Nuclear transporters that transport mutant nucleophosmin look to be a promising new treatment target, and Twist Bioscience is  excited to be providing the tools that aid researchers in making such life changing discoveries.