Gene therapy is in the spotlight, as advances in technology have made genome editing more precise and reproducible.
Twist Bioscience
8 min read 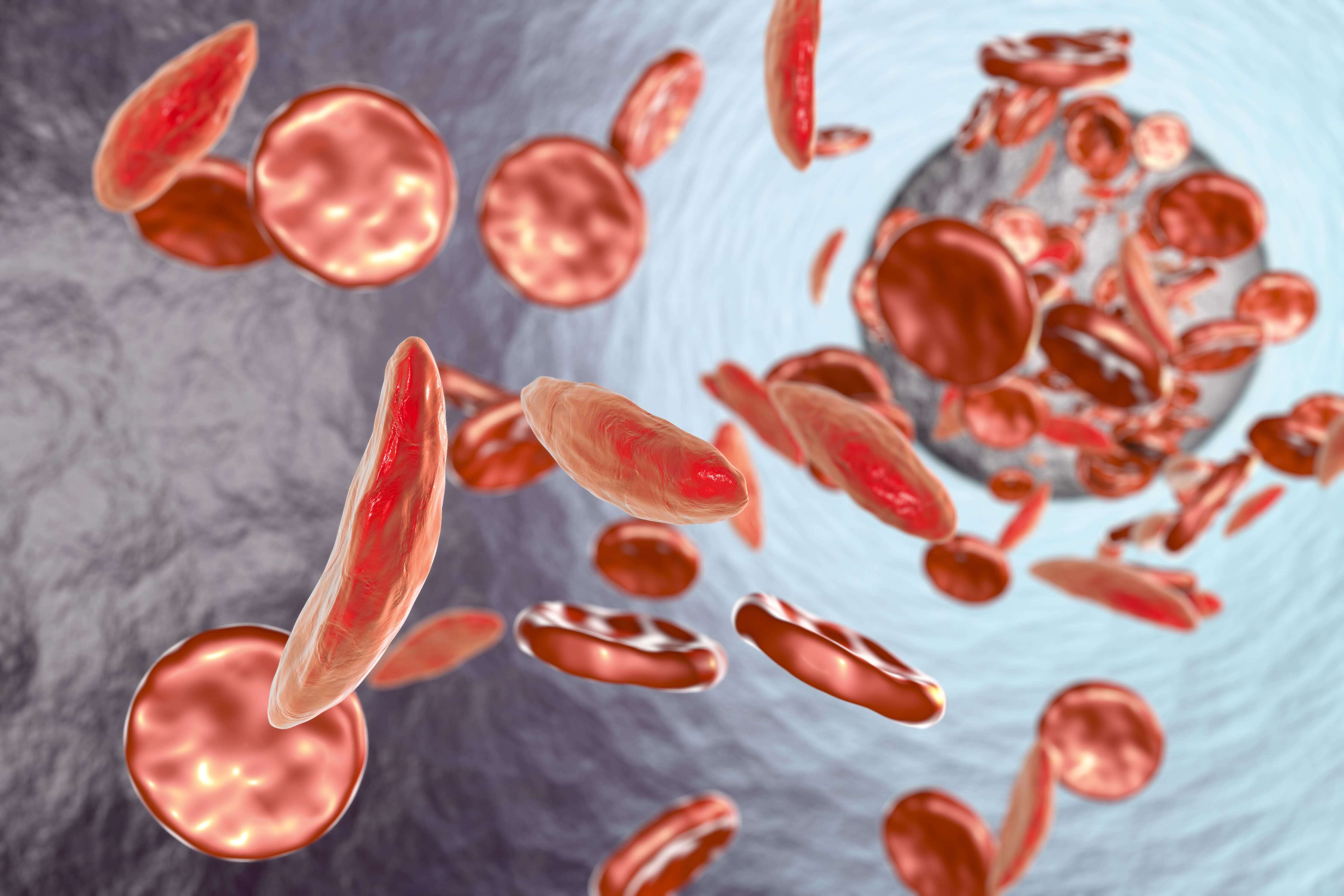 Gene therapy is in the spotlight, as advances in technology have made genome editing more precise and reproducible. The genetic sickle cell disease is next in line for a transformative therapeutic cure. With the introduction of only one normal hemoglobin gene within red blood cells, patients have the potential to live a normal life. Several companies are leading the way with ongoing clinical trials using viruses, zinc-finger nucleases, and CRISPR-Cas9 in an effort to cure patients with sickle cell disease.

The slightest change in our molecular makeup can have crucial effects. A one-letter alteration can result in a life-long disease with severe anemia, ischaemia, stroke, and even death. That malady is called sickle cell disease and is caused by one nucleotide mutation in a gene that makes up the oxygen-carrying molecule, hemoglobin. The mutated hemoglobin causes red blood cells to become hard and sticky due to their sickle shape resulting in blocked blood vessels and early red blood cell death. This can lead to constant anemia, infection, pain, and stroke. Recent advances in gene therapy technology have made the possibility of a cure for sickle cell disease a reality. 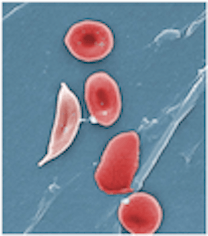 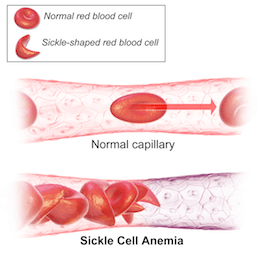 Several gene therapy paths are being taken to try and cure patients of sickle cell disease. Researchers point out that it is still early in the course of these experimental treatments, saying it may take at least three years before one is approved. “We are in uncharted territory,” Dr. David A. Williams, chief scientific officer at Boston Children’s Hospital, told The New York Times, in an article describing the advances.

One potential cure uses a virus to deliver a non-mutated hemoglobin gene into cells. Another turns on the gene for fetal hemoglobin, a fully functional form of hemoglobin active in the fetus and shut off after birth. And in yet another approach, CRISPR-Cas9 can be used to edit the one faulty DNA letter into the correct one. Each of these methods has the potential to result in a cure, however each also has limitations.

In an exciting advancement, clinical trial data from bluebird bio was recently released showing very positive results for patients treated with their gene therapy, LentiGlobin. The treatment starts by extracting the patient's own bone marrow and enriching the stem cells. A lentivirus is then used to infect bone marrow stem cells, which inserts a normal hemoglobin gene into the the cells’ genomes. Meanwhile, the patient receives several rounds of chemotherapy to wipe out any remaining bone marrow that has the diseased mutation. Finally, the engineered stem cells are injected back into the patient, with recovery taking three months.

Nine patients were treated with LentiGlobin in the Group C Phase I/II trial that was reported, four of which had reached six months post treatment with reported results. In all four patients, the symptoms of the disease had miraculously subsided. Doctors reported that significantly less cells were sickle shaped, and there was evidence of the normal hemoglobin protein in their red blood cells. Although a small Phase I/II trial, the results are extremely promising and allow the company to move to a larger Phase III trial.

The patients suffering from sickle cell disease enrolled in the LentiGlobin trial were out of hope and sick of current treatment methods which require continuous rounds of blood transfusions. LentiGlobin was a miracle for 21- year-old Brandon Williams, a patient in bluebird’s trial. Because of his sickle cell disease, Williams had suffered four strokes by age 18, making it hard for him to speak, and he had lost his older sister to the disease, according to the New York Times. His mother, Leuteresa Roberts, vividly remembered the call she got from her son’s doctor during the trial, telling her that her son was producing enough normal blood cells.

“I was like, yes, yes, thank you Lord,” said Mrs. Roberts. Williams would no longer have to suffer from sickle cell disease.

Only time will tell if the effects of the stem cell engineering treatment will last, though. The biggest concern when using a lentivirus to deliver a gene in any cell type is that it is unknown where the gene will be integrated into the genome. The thousands upon thousands of stem cells that are virally manipulated have a possibility of turning cancerous if the gene insertion is randomly integrated at an unfortunate, cancer-inducing spot. Although this is a rare occurrence, it is still a possibility, and patients receiving the treatment will need to be monitored for life.

A more targeted approach for sickle cell patients is to gain a normal hemoglobin gene by unsilencing the hemoglobin’s fetal gene using zinc-finger nuclease gene editing technology. Fetal hemoglobin has a slightly higher oxygen binding affinity and helps a fetus develop in the last seven months in the womb. The fetal gene is switched off, and the adult gene is switched on a couple of months after birth. Bioverativ, a Sanofi company, is currently in Phase I/II trials for BIVV003, a zinc-finger nuclease based therapy aimed at turning the fetal hemoglobin gene back on.

Zinc-finger nucleases are enzymes generated by fusing a zinc-finger DNA-binding domain that is designed to target a specific DNA sequence, and a DNA-cleavage domain, resulting in a highly specific form of ‘genetic scissors.’ When expressed inside a cell, the zinc-finger nuclease binds to the DNA at a specific sequence and creates a double-strand break. Two zinc-finger nucleases used together can cut small or large DNA sequences out of the genome, effectively mutating or deleting genes of interest. The cell’s natural DNA repair machinery will fix the breaks. BIVV003 was designed to target disruption of the BCL11A gene, which is responsible for the silencing of the fetal hemoglobin gene. With BCL11A turned off, fetal hemoglobin is turned back on.

Administration of the zinc-finger nuclease therapy is similar to that of bluebird’s LentiGlobin, in that bone marrow stem cells are enriched and treated. However, BIVV003 does not use viruses and does not integrate a gene into the cells’ genomes. Instead, it very specifically targets the BCL11A gene for editing, effectively turning the fetal hemoglobin gene back on. This method has worked in mice, and is currently being tested in humans. Unfortunately, zinc-finger nucleases may also have some off-target effects and possibly edit the genome at undesired locations. Software can be used to predict these effects, however, when editing the genome, there is always a possibility that off-target editing could occur and lead to complications, such as the development of cancer. Just like the patients that received treatment with LentiGlobin, patients receiving treatment with BIVV003 will need to be monitored for the rest of their lives.

Harboring similar potential side effects as lentivirus-delivered genes or zinc-finger nuclease editing, CRISPR-Cas9 gene editing is yet another way in which a normal hemoglobin gene can be restored in sickle cell patients. In a Phase I/II clinical trial by Vertex Pharmaceuticals in collaboration with CRISPR Therapeutics, CTX001 is being tested as a therapy that is also aimed at restoring fetal hemoglobin in patients with sickle cell disease. With a very similar strategy to BIVV003, CTX001 will direct the CRISPR-Cas9 complex to edit the BCL11A fetal hemoglobin silencing gene. The CRISPR-Cas9 system achieves gene edits through the DNA cutting enzyme Cas9, which uses CRISPR sequences as a guide to target specific sites on the genome. This system, although gaining more and more specificity with updated CRISPR-Cas9 technology, is still far from error-proof.

While the trials presented here are having early success, it’s important to point out that not all gene therapy clinical trials are on their way to finding a cure. For example, Sangamo Therapeutics’ zinc-finger gene therapy,  SB-913, for the treatment of Hunter syndrome, recently posted disappointing results for their Phase I/II trial. But the company is not giving up and currently is making plans for a second-generation drug design.

Nonetheless, the results from head-to-head comparisons of gene editing specificity, cost, and overall patient health after treatment outlined here will be assessed by doctors to determine which treatment options to implement. Furthermore, the possibility of correcting the mutated adult hemoglobin gene is still an option, and is currently being investigated in preclinical studies. With the many gene therapy clinical and pre-clinical investigations underway for patients of sickle cell disease, today marks an exciting time full of hope and possibility. At Twist Bioscience we believe that gene therapies such as these will lead to breakthroughs in the discovery of treatments and cures for many of our world’s most pernicious diseases. It’s an exciting time for all of us at Twist to enable the pioneers of DNA healthcare technology fighting disease and improving health.