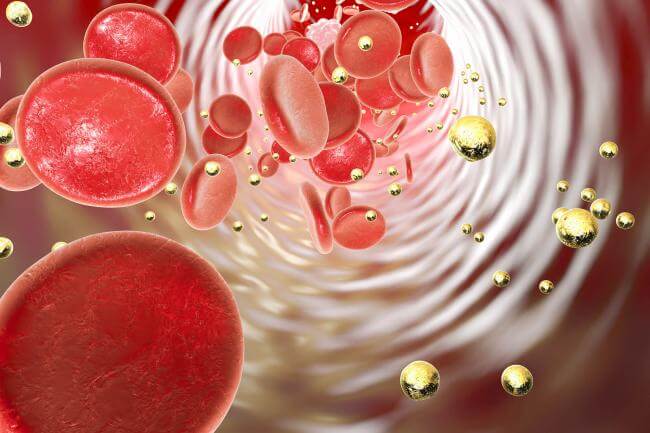 UC Berkeley researchers Niren Murthy and Irina Conboy recently reported in Nature that they successfully tested a novel method to deliver a therapeutic payload of CRISPR-Cas9 into a living organism.
In Murthy and Conboy’s method, which they call CRISPR-Gold, the DNA-cutting enzyme Cas9 is packaged along with guide RNA and donor DNA in a conjugate with gold nanoparticles. The researchers demonstrated that a single course of injections of CRISPR-Gold into the muscle tissue of mice afflicted with Duchenne muscular dystrophy could more effectively edit the disease-causing mutation than injection of the same gene-editing components without the CRISPR-Gold delivery vehicle.
The gold nanoparticle delivery vehicle is designed to hold together the crucial gene-editing components until they reach their target cells. The gold nanoparticles are designed to have markers on their outer layer that can be recognized by targeted cells, which import the gold and its payload by endocytosis. Once the CRISPR-Gold complex reaches the nucleus of the cell, the vehicle dissolves and the CRISPR system freely interacts with DNA that matches its guide RNA template. After the Cas9 enzyme excises the targeted mutation, the donor DNA can be integrated into the gene via homology-directed repair, resulting in a non-diseased form of the gene.
Duchenne muscular dystrophy is a rare muscle wasting disease that causes weakness and paralysis, and decreases life expectancy. The disease is caused by a point mutation in the gene for dystrophin, a crucial muscle protein. When dystrophin cannot be formed correctly, muscles lose their cohesiveness and succumb to progressive atrophy.
Because Duchenne muscular dystrophy is caused by the mutation of a single nucleotide, it’s an attractive target for gene editing therapies using CRISPR. Since the initial recognition of CRISPR’s ease of use and scientific value as a gene editing protocol, many research teams have focused on the therapeutic potential of the method. Therapeutic strategies to correct point mutations are seen as a low hanging fruit, and although recent breakthroughs validate the method, CRISPR-based therapies are not available outside of clinical trials.
The current method for delivering gene editing therapies is the use of adeno-associated viruses. But the usefulness of this method is critically limited by the pre-existing immunity to these viruses that commonly exists in the human population. Furthermore, the payload that adeno-associated viral packages are capable of delivering is often not big enough to include all the necessary components for gene therapy using CRISPR, so multiple viral vehicles need to be prepared for successful treatment.
For these reasons, and with the increase in the number of human clinical trials of CRISPR-based therapeutics set to be conducted, there is a critical need to develop new gene therapy delivery mechanisms. The successful demonstration of CRISPR-Gold in mouse models of Duchenne muscular dystrophy suggests a viable path forward, with the potential to advance gene therapy targeting numerous genetic diseases. Companies continue to develop methods to attack diseases such as hemophilia and Cystic Fibrosis, enabled by the use of Twist Bioscience's advanced, high-throughput DNA synthesis capabilities.
For now, Murthy and Conboy’s work will set an example for discovery. “CRISPR-Gold and, more broadly, CRISPR-nanoparticles open a new way for safer, accurately controlled delivery of gene-editing tools,” Conboy said in a UC Berkeley news report. “Ultimately, these techniques could be developed into a new medicine for Duchenne muscular dystrophy and a number of other genetic diseases.”