A Web of Possibilities?

For many of us, spiders evoke revulsion rather than admiration. Discover why there's much to admire.
Twist Bioscience
8 min read 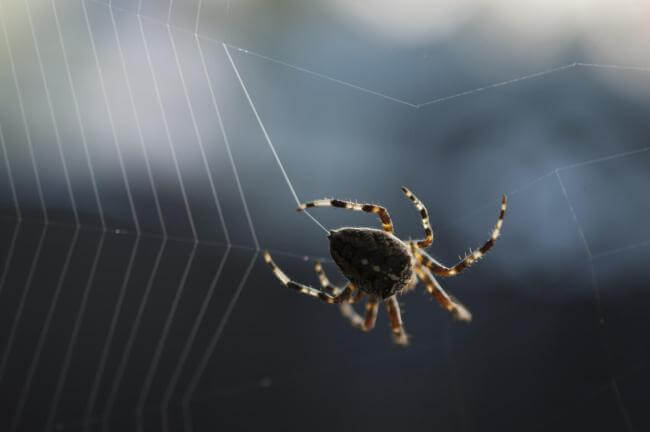 For many of us, spiders evoke revulsion rather than admiration, but there is much to admire in these arachnids. Spiders have been evolving for almost 400 million years, into more than 45,000 species that have established themselves in virtually every habitat. Their most notable characteristic is their ability to spin silk, which they use to make draglines and drop away from predators, construct elaborate and beautiful webs to trap prey, and even to lasso their food. Spider silk has been the object of human interest for many years, and its physical properties could make it as useful for people as it is for spiders.
Why Spider Silk?
As it turns out, spider silk is stronger than steel by weight, tougher than Kevlar, and lighter than carbon fiber. Spider silk has been used to dress wounds since the first century AD. Silk from the silk worm has been used and prized for centuries as a raw material used to make very light and comfortable fabric for clothing. Spider silk could conceivably be used for the same purpose, and even to provide clothing that offered protection from physical injury. The challenge is to get enough of it for various uses.Attempts have been made to “farm” spiders in order to produce enough silk to weave cloth. One million golden orb spiders were collected in Madagascar for the successful production of 80 feet of silk. However, since it takes 14,000 spiders to produce just an ounce of silk, and the spiders tend to cannibalize each other during the process, the farming approach is not commercially viable.
Enter Synthetic Biology
Synthetic biology offers the potential to generate large volumes of spider silk by modifying other organisms to produce it in high quantities. As is turns out, spider silk is a protein produced by fibroin genes, which makes it very amenable to introduction of genetically modified genes into bacteria, yeast and even other insects. These modified genes are designed and constructed using chemical gene synthesis technology. Other molecules can even be attached to the silk protein to generate silk with specific properties for particular uses.
Spiber Inc. is attracting a lot of attention for its efforts to produce spider silk in bacteria. The Japanese firm has produced spider silk that is then spun into fibers, calling the silk Qmonos after the Japanese word for spider web (kumonosu). Using gene synthesis technology, Spiber has designed and produced more than 650 versions of silk proteins with specific properties for particular applications.
The goal is to use bacterial fermentation to drastically reduce the cost of production of spider silk in order make it commercially viable. Improvements in their gene design abilities and fermentation process have already increased production of silk protein by a factor of 2,500. Spiber’s efforts have recently attracted the attention of outdoor apparel manufacturer The North Face, which plans to introduce a “Moon Parka” made of Spiber’s biosynthetic spider silk in 2016. Spiber is also collaborating with Toyota automotive parts supplier Kojima Industries, with the goal of making cars lighter and more durable.
Advanced Biomaterials
Another similarly-named company—Spiber Technologies—is engineering the two main proteins that make up the spider dragline fibroin, referred to as spidroin 1 and 2. This Swedish company has even trademarked Spiber, to refer to its recombinant spider silk protein, which they have designed by using only a small portion of the spidroin, called a mini-spidroin. The company can provide custom-made biomaterial in a variety of formats, including fiber, film, foam and mesh. Spiber Technologies is focusing primarily on life science applications such as wound healing, implantation for drug delivery, regenerative medicine and cosmetic surgery, and cell culture.
Cleaning up the Textile Industry
Bolt Threads in Emeryville, CA, has engineered yeast to make spider silk with the goal of producing a cloth that feels good against the skin, breathes well, and can be given various characteristics through gene modification to suit a variety of clothing applications, such as UV resistant and machine-washable garments. Most textiles today are made from oil, and production is a very dirty business. China alone generates about 3 billion tons of soot every year manufacturing textile polymers. Discarded oil-based fabrics fill up landfills, while spider silk fabric is biodegradable. Bolt Threads expects to be price competitive with fine-quality natural fibers like mohair and cashmere, and is planning to spin yarn commercially in 2016.
Success Breeds Success
Kraig Biocraft Laboratories in Ann Arbor, MI, has taken a different approach to solving the problem of commercialization of spider silk. Rather than producing silk in bacteria or yeast, Kraig Biocraft has introduced modified spider silk genes into domesticated silkworms. This insect has been used for centuries to produce large amounts of silk fiber that can be efficiently and cost-effectively spun into cloth. The resulting product is a composite fiber known as Monster SilkTM, made up of both silkworm silk and spider silk proteins that is considerably more flexible and stronger than current commercial silk. While ramping up MonsterSilk production, Kraig Biocraft is also developing SpiderPillar, an essentially pure spider silk, as well as a third generation of fibers that goes beyond spider silk’s chemical, mechanical and physical properties to incorporate such things as antibacterial agents for medical use.
It is clear that a wide array of spider silk fibers and cloth will soon be made available for many applications, from recyclable clothing that reduces pollution by the textile industry, to light and durable vehicles, drug delivery, and many other medical applications. These synthetic biology companies are spinning a web of bright possibilities for the future.