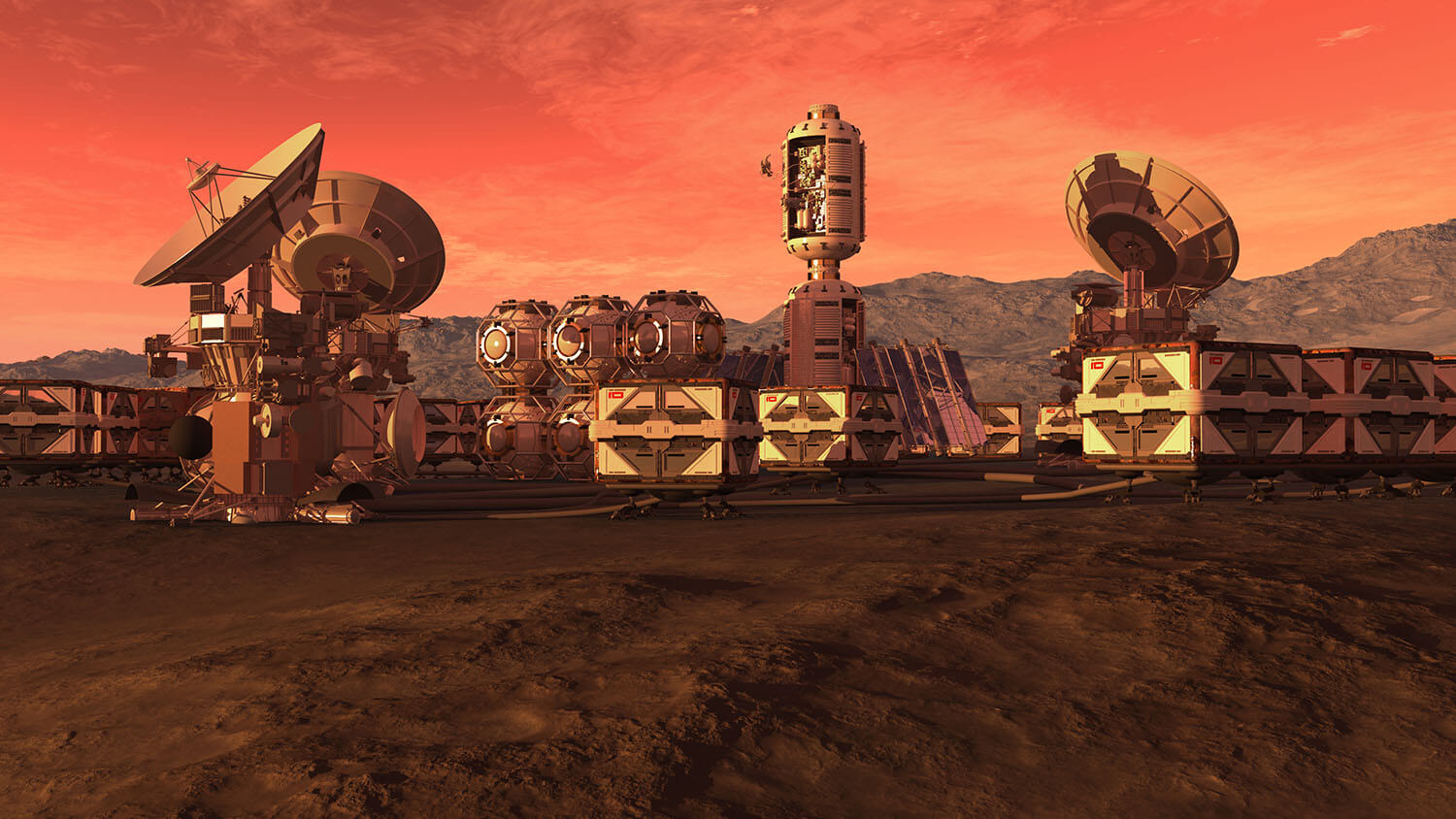 Spoiler alert! The following post contains spoilers for Ridley Scott’s film and Andy Weir’s book ‘The Martian’. If you do not want us to ruin parts of this epic tale of a NASA rescue mission to save an astronaut trapped on Mars, we recommend reading the book or seeing the movie before you read on!
_____________________________
No pun intended, but when it boils down to it, “The Martian” is a story about potatoes almost killing a man trapped on Mars. As it turns out, potatoes are a terrible Martian crop.
In the story, NASA’s Ares III crew must escape when a severe dust storm threatens to destroy their base. Botanist Mark Watney is knocked unconscious by flying debris and his team assumes him to be dead. They make the difficult decision to leave Watney on the surface or risk losing more lives. When Watney comes to, the storm is over but he finds himself alone to fend for himself on the red planet.
Amongst all of the horrors of a solo stay on a lifeless red planet (giant dust storms, unbreathable atmosphere and impossible terrain), one of the biggest dangers is running out of food. Food is a limited resource to Watney since “nothing can grow” in Martian soil.  He also does not have enough food on hand to ration until his earliest rescue date.
Using Martian dust mixed with his own feces (which serves as a microbe and nutrient source) as well as some clever chemistry to produce water from the rocket propellant hydrazine, Watney is able to turn a packet of vacuum-sealed potatoes into a sustainable crop to feed himself until the next Mars landing. He rightfully proclaims himself the “greatest botanist on Mars.”
﻿﻿
All goes well until an air lock failure causes a rapid atmospheric decompression in the Mars base, flash freezing Watney’s crop. This got us thinking here at Twist Bioscience – could synthetic biology help a botanist survive on Mars, including surviving such a devastating decompression event?
Mars colonization is an important future goal in science, and ultimately, beginning a journey to expand human reach throughout the solar system. This post will explore how synthetic biology could theoretically enable farming and colonization of Mars.
Chlorates are the first obstacle to growing crops

When writing The Martian, Andy Weir did his research. NASA previously announced that Mars dust soils contain all of the necessary elements required for the growth of crops, but often in the wrong concentrations, or in inaccessible compounds. A fertilizer would therefore be required for crops to grow — in Watney’s case, all he had available was his own feces.
Despite his vigilance, Andy Weir admitted in an interview that he did miss one thing: chlorates. Martian soil and water are rich in compounds called perchlorates, which self-react to form chlorates. Both of these can accumulate in crops, leading to adverse health effects when ingested. Perchlorates and chlorates are thyroid inhibitors that halt our ability to absorb iodine — an element your thyroid needs to build hormones.
﻿﻿Chlorates of sodium, some of the chlorates that exist on Mars

While not fatal, iodine deficiency can lead to some serious health issues, including goiter (swelling of the thyroid and neck), congenital iodine deficiency syndrome in newborns (stunted growth and mental capacity), and hypothyroidism (leading to fatigue, muscle cramps, mood changes and memory loss). These issues would significantly impact a colonizer’s health, as well as their future children.
Synthetic biology could step in to help with the perchlorate problem. Please note the following ideas in this blog are hypothetical, and while scientifically grounded, have not been empirically studied The ideas included suggest how synthetic biology could be used, not how it is being used.

Perchlorate and chlorate can be moved across the thyroid membrane by iodide transporting pores, so when (per)chlorate concentrations are high they outcompete iodide for access to the transporter. While this is bad news for the thyroid, this same enzyme could be engineered to be useful in the crops. By screening a variant library of iodine transporters, the transporter’s efficiency for perchlorate transport could be increased. These synthetic transporters could then be expressed in specific areas of the food crops, to move perchlorates away from the edible parts.
Some organisms are able to use perchlorate and chlorate as “electron donors” in metabolism, essentially using them to grow1. Engineering crops or soil bacteria to express the ‘perchlorate reductase’ protein from these perchlorate metabolizing organisms would catalyze for the following reaction:
﻿﻿Unfortunately, these enzymes work both ways, and can catalyze (per)chlorate synthesis from chlorite. Also, we do not mitigate the toxicity problem, as chlorite is toxic to humans and plants. Therefore adding in a second enzyme, ‘chlorite dismutase’, will be essential. This catalyzes the following reaction:
﻿﻿Perchlorate reductase relies on the equilibrium between perchlorate or chlorate, and chlorite to direct its reaction. By removing chlorite with the ‘one-way street’ chlorite dismutase enzyme, the perchlorate reductase reaction will be biased towards its favorable direction. Modeling this synthetic system computationally will be essential in understanding the correct protein expression levels required to maintain the flux of compounds in the desired direction.
While removing (per)chlorates from the crop system, the reaction also unlocks useful trace elements for growth such as chloride.  This anion of chorine drives photosynthesis, and controls the opening and closing of leaf pores. Chloride is also an essential nutrient for human health. It is required for proper digestion as well as maintaining blood pressure.
﻿﻿Leaf pores under a microscope

It is easy to imagine that with a little engineering we could enable plants to turn a potentially dangerous chemical into a number of constituents, which would not only help our crops to grow, but also benefit human health.
Thought experiment:

Could SynBio let us make fuel from urine on Mars?

Hydrazine is used as thruster propellant by the Mars rockets in The Martian. It is also used as Mark Watney’s humidity source for growing his crops thanks to some clever chemistry. In the book Watney’s source runs out, stopping his plant growing attempts.
The anammox (anaerobic ammonium oxidizing) bacterial family converts ammonium (NH4+) into nitrogen, with hydrazine as an intermediate (using hydrazeine synthase)8. Helicobacor pylori use urease to convert urea into ammonia (NH3), which is instantly protonated to ammonium in the cell cytoplasm -ammonium is then secreted9.
Adding the H. pylori pathway to the anammox bacteria, and optimizing their inherent hydrazine synthase pathway for hydrazine generation could allow for bacterial rocket fuel synthesis from urea. Urea makes up to 50% of dry matter in urine10– a readily available resource on Mars. Hydrazine made from urea in urine could then be used as propellant, or converted into humidified water for crops.
Synbio engineered organisms could engineer Martian soil

Potatoes are a pretty good Earth crop, but they are not a particularly good Mars crop. In the film’s decompression scene, we see the potatoes subjected to “near vacuum and sub-arctic temperatures” completely destroying all of Watney’s hard work, and his only renewable food source.
In his video diary entry following the incident, Watney notes that regrowing his remaining potatoes would fail since all of the bacteria in the soil were also destroyed. This makes the soil uninhabitable to the plants as it is the bacteria’s job to 1), respire atmospheric nitrogen and leach plant-essential nitrogenous chemicals into the soil; and 2), unlock a stream of other essential nutrients through the bacteria’s natural life and death cycles, and their breakdown of soil detritus.
For crops to survive a fate like Watney’s, both the plants and the bacteria need to be extremely cold and pressure-hardy, and for the bacteria, one thing immediately springs to mind — lichens.
Lichens are unusual organisms that exist as a symbiosis between a cyanobacterial species and a moss species, neither of which can survive without the other. They are the yellow blobs you see growing on rocks and trees, and are a vital part of the forest soil ecosystem. Lichens grow in tight, carpet-like layers, forming their own micro-niches that are hardy enough to grow where nothing else can.
﻿﻿The many-layered thalli that make up lichen

This self-enclosing property makes them incredible survivors. Experiments on the Internetonal Space Station regrew lichen species after they were subject to 18 months of direct space exposure2. Space exposure subjects the lichens to a constant barrage of radiation, nutrient deprivation and extreme cold — arguably a worse fate than Watney’s potatoes.
Lichens are also able to adapt to their environment quickly. Lab experiments with faux Martian soil showed that a lichen species could adapt to grow successfully in Mars-like soil in just over a month3.
Lichens can also be genetically manipulated by hijacking the DNA injecting machinery of the bacterial pathogen Agrobacterium tumefasciens4. This opens lichens up to a number of classical synthetic biology methods, centering on the introduction of genetic information.  Some species like Reindeer moss (Cladonia rangiferina) are completely safe to eat, and are nitrogen fixers. This means that they can take nitrogen from the air, and use it to power their metabolism. In this process they also leach nitrogenous chemicals into their surrounding soils, enriching and fertilizing the soils they grow on.
However, converting nitrogen from the air and soil is slow, and N2 is somewhat limited in Martian atmosphere, making up only 2.7% of the air compared to 78.1% on Earth. One way to maximize the nitrogen cycling process could be through directed evolution — a form of accelerated selective breeding. A library of organism phenotypes would be iteratively mutated and grown under increasingly Mars-like conditions, forcing their adaptation to the low Nitrogen content.
Many ground lichens secrete active chemicals called depsides, which inhibit plant germination5. The presence of these would be disastrous when trying to grow an edible crop, so a CRISPR technology would have to be used to delete or disrupt each depside’s respective polyketide synthase enzyme. Such a lichen would then be a perfect candidate to help with perchlorate filtration that was discussed earlier.
For its hardiness and ease of genetic engineering, lichen could be a fantastic failsafe to house and protect the bacteria that would otherwise be destroyed by a rapid freezing event. A lichen could easily be recovered and regenerated in order to maintain nutrient-rich soil. In an emergency they could also be used as food ration to prolong survival.
Synbio broccoli – the next Mars crop!

As we’ve already discussed, Watney’s potatoes were completely destroyed by the cold snap. Flash-frozen potato tubers are still edible, but they cannot be regrown. A potato is therefore a bad choice—instead a seeded crop may be a preferable food source on Mars.
So-called orthodox seeds are some plant species’ tool to for surviving extreme conditions. Their non-living outer tissues, and complex ‘glassy’ cell cytoplasms allow for protection from both desiccation and freezing.
In order to survive freezing, the orthodox seeds need to be protected against ice crystals. If the ice crystals get past a certain size (0.4 μm) and density (20 crystals per μm2), then the plant is in trouble6. A seed’s natural defenses can protect it to an extent, to the point where some seeds are still viable after liquid nitrogen exposure (-196°C)5. To assure survival, synthetic biology again can step in to help reduce water crystal size to below their critical mass.
References