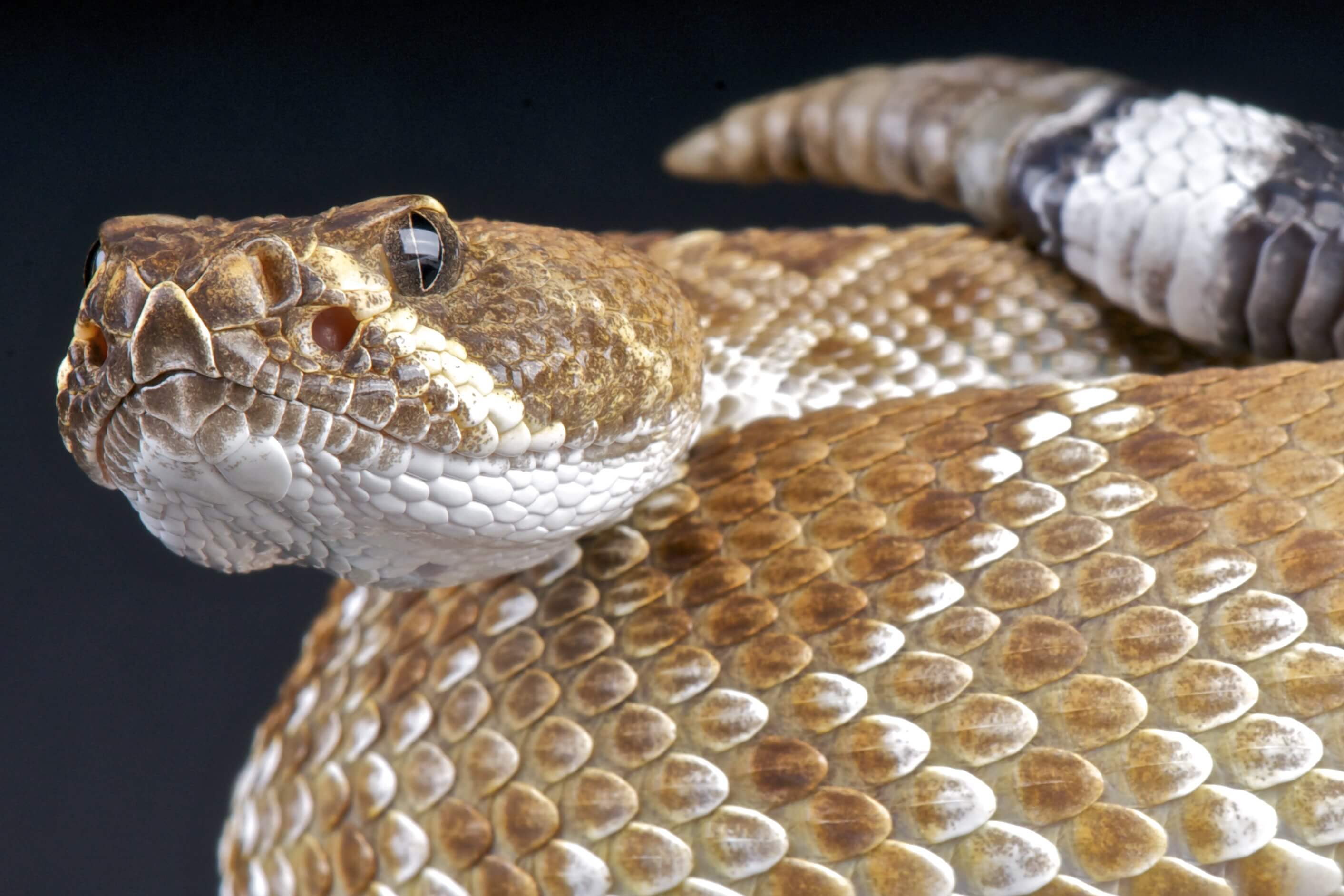 In a recent study published in Biochemical and Biophysical Research Communications, by Yaohui Liu, Ph.D., and colleagues from Nankai and ShanghaiTech Universities in China, a high-throughput method was established for identifying novel venom peptides that block ion channel activity. The researchers used an oligo pool, synthesized by Twist Bioscience, combined with a lentiviral reporter assay and next-generation sequencing to uncover several venom peptides that interfere with the Kv1.3 potassium ion channel that could act as a starting point for therapeutic drug discoveries for a variety of diseases.

Evolutionary pressure breeds creative and unique strategies for living organisms to survive. Venom, a poisonous secretion delivered by sting or bite, has evolved into many forms in animals to escape predators and stun prey. The mechanism of action for different venoms vary, however, what they have in common is an ability to target a pathway or mechanism that is shared among all potential predators and prey. For example, many venoms are neurotoxic, targeting very specific molecular complexes that are critical to all neuronal function. There may be millions of different animal species, but all of their neurons fundamentally work in the same way.

An important class of neurotoxic venoms, called ion channel toxins, disable neurons by preventing the propagation of electrical signals. Ion channels are transmembrane proteins which form a selective hole within the cell membrane, only allowing distinct ions to flow either in or out of a cell. The precisely coordinated influx of negatively and positively charged ions in and out of the length of a neuron creates an electrical signal that flows to or from the brain. Ion channel toxins are peptides, or small proteins, that bind directly to various parts of an ion channel to block their function. Rattlesnakes, scorpions, tarantulas, coral, wasps, and many other animals have ion channel toxins in their venom leading to severe pain, paralysis, and possibly death.

A sodium (Na+) ion channel allows the influx of Na+ ions inside the cell, which gives the inside of the cell a net positive charge. (Source: Wikimedia Commons) 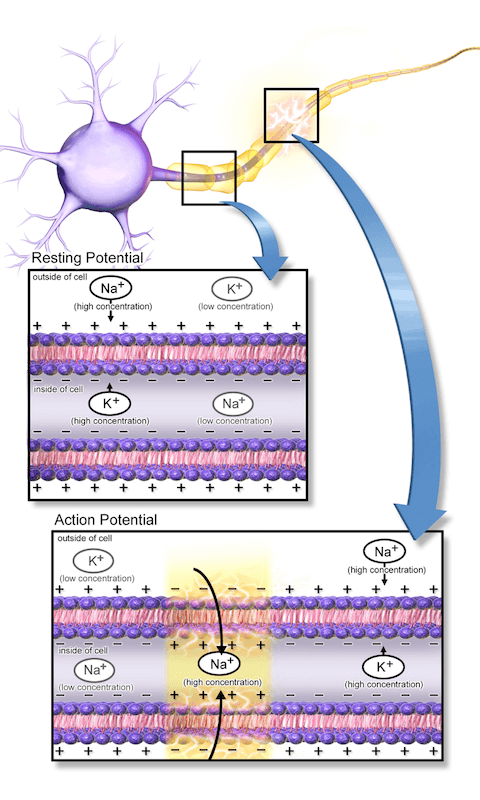 The inside of a neuron is net negatively charged until sodium ion (Na+) channels are activated, which causes a rapid influx of Na+ ions inside the cell, changing the inner charge in that local area to a net positive. This influx triggers a neighboring Na+ channel to open so that the positive charge will be propagated through the length of the long neuron (electric current). To reset, potassium ion (K+) channels will open, allowing K+ to exit the cell, eliminating the positively charged state of the inner membrane. Sodium and potassium pumps are then activated to restore the original resting state of the cell. (Source: Wikepedia.org Creative Commons 3.0,  Blausen.com staff)

While ion channels are a large part of neuronal function, they also have a role in many other aspects of human life such as T-cell activation and heart beat rhythm. There are also a huge variety of different ion channels - for example, within cells in the inner ear alone, there are over 300 types of ion channels!  Since ion channels are such a huge part of human anatomy, it’s no surprise that abnormalities in ion channels result in a wide array of human diseases. Cystic fibrosis, epilepsy, schizophrenia, polycystic kidney disease, Parkinson’s disease, and many more diseases have been linked to malfunctions in ion channels. The pharmacologically active properties of neurotoxic venoms provide a fantastic starting point for the development of revolutionary drug therapies for ion channel-related diseases.

While dozens of ion channel toxins extracted from venom have been discovered and characterized, there are still millions of venoms that have not been investigated and hold high potential as models for new drugs. In a recently published paper by Yaohui Liu, Ph.D., and colleagues from Nankai and ShanghaiTech Universities in China, entitled, “Identification of novel Kv1.3 targeting venom peptides by a single round of autocrine-based selection,” a high-throughput method for the discovery of potassium channel peptides from various venoms is illustrated and tested.

Traditional protocols for identifying ion channel peptides from venoms use a laborious technique called bioassay-guided fractionation, which requires a large amount of venom specimen and many rounds of chemical fractionation and activity assays. In 2016, that method became obsolete when another research group, lead by Hongkai Zhang, Ph.D., developed an assay that expressed a library of venom peptide genes within fluorescent reporter cells. When a venom peptide interacted with a potassium ion channel, the cells would fluoresce, which would allow them to be separated using FACS (fluorescence activated cell sorting). Since each fluorescent cell would have multiple venom peptide genes in them, the genes needed to be recovered, and then expressed in another round of selection. After three selection rounds, there was enough of an enrichment of positively interacting peptides that they could then be sequenced and identified.

While this process was a vast improvement from bioassay-guided fractionation, the many rounds of selection required for Zhang’s method was unnecessary. Liu and colleagues improved upon Zhang’s method by introducing next-generation sequencing (NGS) to bypass the superfluous selection steps. To demonstrate that this shortcut would indeed lead to the identification of ion channel disruptors, the researchers first built a venom peptide gene library. Using public toxin databases, venom peptide sequences were collected and 1,056 venom peptides derived from 306 different animal species were chosen for the library.

The DNA library pool was then synthesized by Twist Bioscience and the genes were cloned into lentivirus. The lentivirus were constructed in such a way as to carry multiple venom peptide genes per virus particle, with different lentivirus carrying some of the same genes. Reporter cells were infected with approximately 1 virus particle per cell. If the peptides introduced by the lentivirus positively interacted with a potassium ion channel within the infected cell, the cell would fluoresce red. Red cells were then sorted, and the venom peptide genes within each one amplified and directly submitted for NGS. Using this streamlined method, the group was able to demonstrate that with only a single selection round, they were able to successfully discriminate potassium ion channel targeting venom peptides versus background non-binders.

The use of NGS in pooled library assays is becoming a common occurrence in biology due to its high-throughput ability. However, positive hits identified in a high-throughput screen still need to be subjected to further experimentation for verification and characterization. Liu and colleagues tested the top 10 positive hits in their venom peptide screen using a similar reporter assay, and found that only 3 of them significantly turned on the fluorescent reporter. When subjected to a patch-clamp assay, in which ionic currents are measured, only 2 of the venom peptides showed real inhibition of the potassium ion channel.

These results demonstrate that this new high-throughput screening method indeed leads to the discovery of novel venom peptides that block ion channel function, and that there is still a huge potential for future discovery. Liu’s study only investigated the interaction of about 1,000 venom peptides with one specific potassium ion channel, leaving room for this assay to be applied to thousands of different human ion channels with millions more venom peptides. Exciting times are ahead, full of discovery and applications to treat a variety of different diseases.