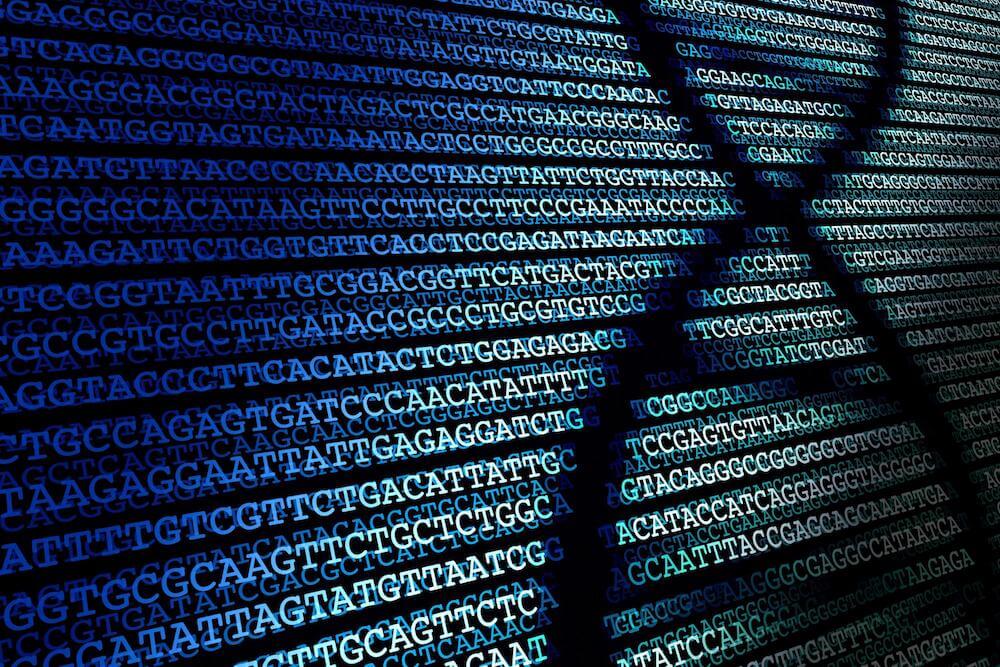 In a recent study published in the journal Cell Death and Disease, by a group of researchers from Regina Elena National Cancer Institute and Istituto Superiore di Sanitá in Rome, an organoid model for renal cell carcinoma was developed and characterized for comparison with responses in primary tissue. Using whole exome sequencing, processing genomic DNA for exome-targeted library enrichment with the Twist Bioscience Human Core Exome Kit, the researchers were able to show that their organoid models had very high genomic correlation with primary patient tissue.

Nine out of ten clinical trials fail, and even when drugs receive FDA approval, they still only work on a fraction of patients for a specific indication. One reason for the high clinical trial failure rate is a lack of preclinical assays that do a good job of mimicking human response to novel drug treatments. Safety and efficacy of new drugs need to be predicted with higher accuracy. Additionally, there are very few assays that can be performed for individual patients to predict which drug treatments will likely be the most effective. However, a breakthrough in model systems is starting to take hold in the industry as a more reliable and predictive technique.

Organoids are essentially mini-organs created in a dish from human cells cultivated directly from healthy or diseased patients. Organoids can do a very good job of mimicking whole organ responses to drug therapies because they have the same mixture of cells that a whole organ has, and also can contain similar 3D structural features. This is in contrast to the widely popular 2D cell culture, which typically only tests one cell type at a time within a monolayer on the bottom of a dish. Even though it’s known that 2D cell culture is not a great model for disease, the technique is well-established, inexpensive, and fast. While 2D cell culture is still very useful for first line testing, it is far from having the predictive capabilities needed for preclinical confidence.

In general, preclinical research programs move from 2D tissue culture testing to mouse models. While mouse models are considered the gold standard for predictive disease modeling, for some diseases no reliable mouse models exists. In addition, experimentation using mice is expensive, slow, and non-human. Researchers try to supplement their mouse experiments by transplanting human cells into mice, called xenografting, which is supposed to mimic whole body response dynamics on drug treatments. However, xenografted human tissue often does not maintain the same characteristics as it would within the human body. While organoids do not incorporate full body responses to drug testing, they serve as a more comprehensive and reliable human tissue model amenable to high-throughput assays for genomic, proteomic and drug screening.

Organoid modeling is still a relatively new technique that is experiencing significant progress to cover more diseases and provide more representative and predictive assays. Research published in the journal Cell Death and Disease, led by three co-first authors, Ludovica Grassi, Romina Alfonsi, and Federica Francescangeli from Regina Elena National Cancer Institute and Istituto Superiore di Sanitá in Rome, Italy, entitled "Organoids as a new model for improving regenerative medicine and cancer personalized therapy in renal diseases," has established the first normal and tumor renal cell carcinoma organoids directly from fresh and frozen patient tissue. In the past, human kidney organoids have been created using pluripotent embryonic stem cells, however, this method may not be as physiologically relevant as the use of tissues from adult patients. In addition, organoids made directly from patient tumors allow for personalized testing of potential therapies to predict patient response on an individual level.

Currently, surgery remains the only ‘curative’ option for renal tumors. Even in patients who receive surgery, a quarter of them relapse with distant metastases. Research to identify predictive biomarkers and drug therapies for renal carcinoma is greatly needed. Kidneys are also subjected to toxicity as a side effect of unrelated drugs. If kidney toxicity could be identified and characterized during drug development and before treatment, it may help to prevent detrimental kidney damage. Renal organoid models may help to solve these issues.

For their initial experimentation, the Italian researchers obtained normal kidney specimens from thirteen patients who had just received total nephrectomies -- removal of both complete kidneys. One important characteristic of organoids is that they assemble through stem cells or organ progenitors and self-organize through spatially restricted lineage commitment -- cell division and differentiation based on where cells are located with respect to one another -- in a manner similar to the growth of a tissue during development. After enzymatically separating the tissue into a single cell suspension, the tissue was incubated in a growth medium that contained stem-cell-selective growth factors. The enriched stem cells were then plated in a growth medium that contained a substance called Matrigel, which provides a flexible matrix that allows cells to form and grow in 3D. The researchers reported the presence of distinct organoids forming by two weeks after Matrigel suspension with a success rate of 100%. Twelve samples produced organoids that could be cultured for an astounding fifteen weeks - a very long time for normal cell tissue culture! 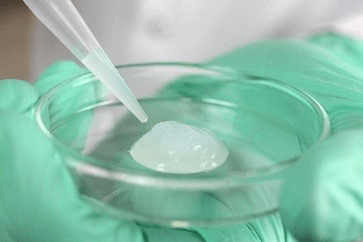 Similar to Matrigel, this nanofibrillar cellulose hydrogel provides a scaffold for the assembly and growth of 3D cell cultures like organoids. (Source: Wikimedia Commons)

The researchers then needed to verify that the organoids they were seeing were in fact representative of normal kidney tissue and had the characteristics of a classic organoid. Within the core of the organoids, they found that cells had markers of stem/progenitor cells, which is a characteristic typical for organoids. They also used RNA-sequencing, qPCR, immunofluorescence and structural staining techniques to compare expression patterns and morphology of the organoids to parental (original kidney) tissue. What they found is that cell markers for various parts of the kidney, such as the Medulla and Cortex, ranged across different organoids, as opposed to all organoids containing all markers. They also found that some organoids displayed glomerular, tubules, and evidence of angiogenesis, structures characteristic of developed kidneys. Overall, the researchers established that their lab-made organoids had high correlation with the expressed genes and structures of fully developed kidney tissue, although not every organoid was created equal. 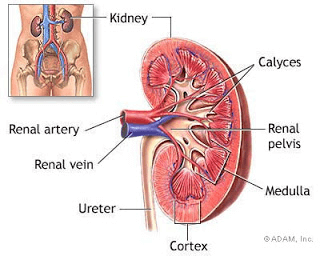 Anatomy of the human kidney illustrating the varied structures of the Medulla versus Cortex. (Source: Wikimedia Commons)

One of the most valuable uses for normal tissue organoids is drug toxicity testing. Kidney cell death, in particular, is a common side effect of many drug therapies. Organoids created from normal kidney tissue could provide a very reliable model for drug toxicity testing. The researchers tested this hypothesis by treating their lab-made organoids with a popular anti-cancer drug called Cisplatin, that has been shown to be toxic to certain parts of the kidney. A great characteristic of the researchers' normal kidney organoids is that they represented a range of kidney cells and architectures. Because of this, the researchers were able to determine that only tubule cells were sensitive to Cisplatin treatment, and that other structures and cell subtypes were not affected. This data correlated with previously published studies using non-organoid models and suggests that normal kidney organoids can be very useful for drug toxicity studies.

The researchers moved on from normal tissue organoids to the development of organoids made from renal cell carcinoma tissue. Samples from fifteen patients with the most prominent type of renal cell carcinoma, called clear cell renal cancer (ccRCC), who had undergone total or partial nephrectomy, were used to establish organoids. The same method for the development of normal tissue organoids was used, although the success rate for tumor organoid formation was only 66%. Additionally, tumor organoids were not able to preserve their structures over time and most stopped growing after only ten weeks. Nevertheless, the tumor organoids that were established showed high correlation with the parental ccRCC tissue. When evaluated for 3D morphology, the researchers found that, unlike normal organoids, the ccRCC organoids displayed a very loosely organized 3D structure of different sizes and were composed of cells with large, abnormal nuclei. Even so, similar to normal organoids, ccRCC organoids had stem/progenitor cells at their center, and expressed genes indicative of various kidney cell types.

To establish the tumor organoids as good patient mirroring models, evidence of complete genomic representation is critical since cancer is driven by genetic mutations, and tumor tissue is known to have a heterogeneous population of cells with differing genomic profiles. To test for this, the researchers turned to whole exome sequencing (WES), which is used to sequence all protein coding regions (exons) within a cell or collection of cells. When performing WES, it’s important to accurately and uniformly enrich the genomic DNA before sequencing. To achieve this, the researchers used the Twist Bioscience Human Core Exome Kit to amplify and enrich the exons within the tumor organoids and parental tumor tissue for comparison. WES revealed that there was 95% correlation between tumor organoids and parental tumor tissues and that tumor organoids demonstrated a heterogenous mixture of cells with differing genomes. This method also revealed that tumor organoids contained mutations that are frequently associated with ccRCC.

The characterization of ccRCC organoids suggested that they would be good models for drug efficacy testing. To test this, the researchers treated normal and tumor organoids with kinase inhibitors approved for the treatment of renal cancer, sunitinib and temsirolimus, or kinase inhibitor therapies still in clinical development, SU11274, Foretinib, Cabozantinib and Levantinib. They found that sunitinib had no effect on either normal or tumor organoids, while temsirolimus resulted in a lower capacity for tumor organoids to form. All of the other tested drugs had no negative effects on normal organoids, but reduced levels of phosphorylated ERK (extracellular signal–regulated kinase) and AKT (also known as protein kinase B). Foretinib was the only drug to induce expression of Caspase-3, a protein indicative of programmed cell death. The range of outcomes for tumor organoids and consistent results for normal organoids is a strong indicator that organoids can serve as an exciting new approach for personalized therapy decision-making.

Finally, the researchers established an important proof-of-concept by creating organoids from frozen tumor tissue. While only half of the samples resulted in successful organoid formation, the development of an improved protocol could lead to the regular use of frozen tissue for organoid drug testing. Overall, the researchers establish that organoid models for both normal and tumor renal tissue have great potential as models for drug safety and efficacy testing. The hope is that these models will lead to more reliable testing and higher success for safer drugs to treat renal cell carcinoma.