Phosphoramidite chemistry is the gold standard method for DNA synthesis that has been used in the industry for almost 35 years. Since its discovery, its simplicity and high efficiency have allowed large volumes of oligonucleotide sequences to be synthesized up to 200 base pairs in length. Currently, it is the only commercially viable chemistry able to provide the volume of DNA required by the synthetic biology market. Here, we take a look at how phosphoramidite chemistry makes the DNA synthesis process so efficient.

Physical access to any genetic sequence when desired is essential to the practices of synthetic biology and metabolic engineering, as it allows researchers to adapt and better understand life. This necessitates methods that mimic nature, providing synthetic DNA sequences to pursue this research in the lab.

DNA synthesis is therefore one of the most important discoveries of the last century. Natural DNA consists of nucleotides, repeating units that form a chemical chain, linked together by the action of enzymes. Each nucleotide in this chain has three key components (see image below). Current methods of DNA synthesis perform these same reactions using a validated technology: phosphoramidite chemistry, which has stood the test of time. In fact, the seminal patent in this space just celebrated its 34th birthday. Here we are going to take a brief look at the standard phosphoramidite chemistry reaction, the properties that make the technology so reliable, and the role it plays in our commercial process at Twist Bioscience.

A) A single nucleotide. The phosphate and deoxyribose sugar form the backbone of DNA. The nitrogenous base (in this case adenine) is the information carrying unit of each nucleic acid. B) The structure of single stranded DNA. In nature, enzymes form phosphodiester bonds (blue circles) that link the 5th position and 3rd position of adjacent deoxyribose sugars. Due to the modular nature of nucleotides, this chain can grow indefinitely. Source: Figure modified from Wikicommons. Image licensed under CC BY-SA 3.0. Modified image available under CC BY-SA 3.0.

The invention of phosphoramidites

Nucleoside Phosphoramidites were first described in 1981. Phosphoramidites are modified nucleosides, and are a standard chemical used in modern DNA synthesis. These molecules permit the sequential addition of new bases to the DNA chain in an exquisitely simple and exceptionally efficient cyclic reaction.

Before phosphoramidites, DNA synthesis technologies were limited in the length, quality, and yields of the DNA they produced due to reaction inefficiencies that generated branching, truncated or mutated oligonucleotide sequences. (For more information on oligonucleotides, see our blog, “How Oligos Changed the World”). Additionally, growing sequences were predisposed to damage, as the synthesis reaction intermediates were highly unstable, and could be broken apart just by exposing them to air. This was largely caused by the inefficient use of extra chemical groups that were added to each nucleotide, called protecting groups. Protecting groups are designed to mitigate the instability of the growing strand, or prevent side reactions. Phosphoramidites contained optimal protecting groups, which set phosphoramidite chemistry apart from other methods.

A single natural nucleoside is rich in both hydroxyl groups (-OH) and amino groups (-NH2), which will readily react in unintended ways with the other compounds used in the DNA synthesis process. If these groups were left unmodified, undesired molecules would be synthesised that do not conform to the widely-recognized double-helix structure of DNA.

In 1981, the discovery of the nucleoside phosphoramidite was published, offering a powerful tool for DNA synthesis. As shown below, a standard phosphoramidite molecule contains a phosphite instead of the typical phosphate in DNA, as well as four specific protecting groups. These groups provide stable protection, but are easily removable when required. This allows DNA chemists to expose only the reactive centers required to produce a DNA-like molecule when desired, providing a means for tight control over synthesis chemistry. Today, many modified versions of phosphoramidites exist, each with varying properties optimized for specific DNA synthesis processes. 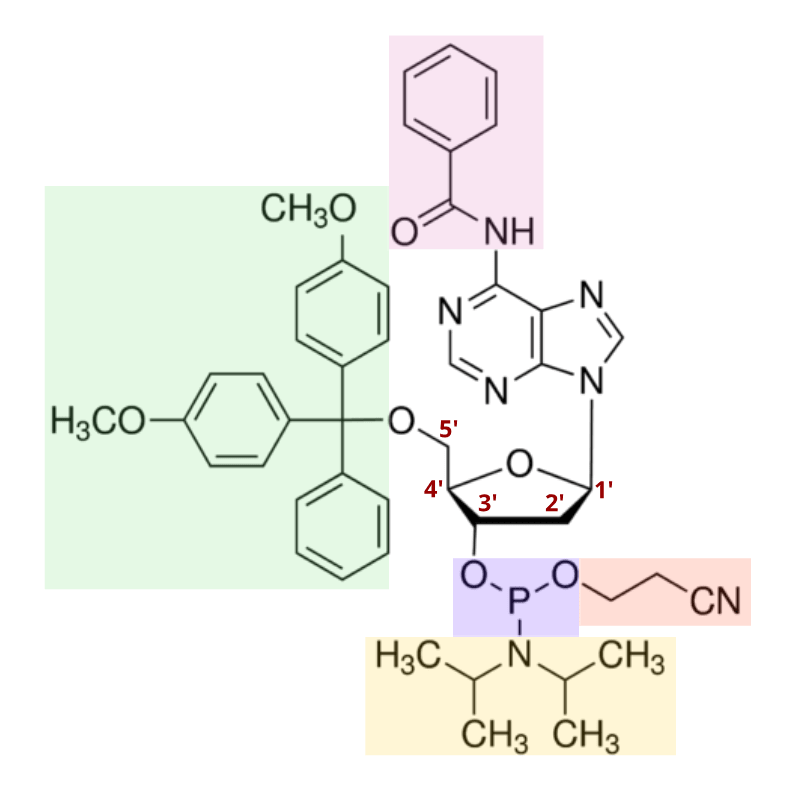 The structure of a standard 2’-deoxyadenosine phosphoramidite. Blue: The phosphoramidite moiety. Green: A Dimethoxytrityl (DMT) group protecting the 5’ hydroxyl group on the deoxyribose - this can be cleaved easily under acidic conditions. Yellow: A diisopropylamino group serves as a leaving group which in the presence of an azole catalyst is removed in a near instantaneous reaction, that links the phosphoramidite to the growing oligonucleotide. Orange: A 2-cyanoethyl group that protects the second hydroxyl on the phosphite - this is easily removed under mild alkaline conditions. Pink: A variable group that protects amino groups in the nitrogenous base - like the 2-cyanoethyl group these are removed at the end in alkaline conditions. Structure obtained from PubMed and modified; SID = 329774846.

Phosphoramidites and their modified variants remain the gold standard in DNA synthesis technology today. As mentioned in the figure above, the removal of the diisopropylamino group, and the subsequent reaction of the intermediate with the -OH group on a deprotected deoxyribose sugar occurs very quickly. Accordingly, the phosphoramidites then react to link with one another at more than 99% efficiency. Together, these properties have allowed phosphoramidite chemistry to stand the test of time, and in fact, the first machines able to automate oligonucleotide synthesis came to market in the late 1980s, able to synthesize a single oligonucleotide in a day. While automation technology has improved and phosphoramidite chemistry is exceptionally efficient and predictable, manufacturing of DNA has been limited to relatively small-scale manufacturing due to lack of innovation in the hardware necessary for automation and miniaturization.

Of note, good chemistry is not enough to make DNA into a tool that serves the throughput required in today’s markets. Synthetic and molecular biology require high volumes of synthetic DNA, often testing thousands of sequence variants at once to optimize processes. Therefore, to serve the needs of this market, we at Twist Bioscience sought to combine phosphoramidite-based chemistry with a proprietary silicon support. We then leverage expertise in miniaturization, engineering, fluid mechanics, robotics and laboratory information management systems to automate DNA synthesis with extreme precision at an unprecedented scale.

DNA synthesis on a solid support pre-dates phosphoramidite chemistry. Robert Letsinger - one of the forefathers of modern DNA synthesis, was the first to synthesize DNA using an older synthesis method on styrene supports in 1965. Solid-phase chemistry was a major advance in the DNA synthesis world, as the reaction components could simply be washed away when each new base was to be added to the oligonucleotide chain. This removed the need for extensive purification of the growing DNA strand at every step.

Silicon makes for an excellent solid support for DNA synthesis. The properties of silicon allow us to miniaturize phosphoramidite chemistry. Silicon is flat at microscopic scales, meaning the fluids required in the reaction flow uniformly over the surface. Silicon is also a very hard material and other materials can be added or removed without changing the surface. Finally, silicon can be aligned, patterned and imaged with ease, and it conducts heat very well so the temperature can be controlled quickly, accurately and consistently across the surface.

With our current commercial workflow in place, we are able to synthesize over one million oligonucleotides simultaneously, each with a unique sequence, meaning each can be synthesized for a different product. Typically, oligonucleotides are synthesized at Twist Bioscience on our proprietary silicon platform in a phosphoramidite reaction cycle as seen below:

Twist’s phosphoramidite reaction cycle. Start-Coupling: the first phosphoramidite in the chain is attached to the solid surface with a catalyzed condensation reaction (think of this as linking pinkies when trying to hold hands). Oxidation: the phosphite triester is unstable, so it is converted to a phosphate to improve sequence integrity (think of this as grabbing hold of the hand tightly). Deblocking: the 5’ protecting group is removed in acidic conditions. Coupling: the next phosphoramidite in the chain is coupled to the available -OH on the previous deblocked molecule in a catalyzed reaction. Capping: as the coupling is not 100% efficient, sometimes the coupling fails. Therefore uncoupled sequences could create errors in the synthesised molecule. To stop this, an unreactive group is added blocking further extension. Repetition: the oxidation -> coupling cycle can be repeated to extend the oligonucleotide molecule in a desired sequence.

It’s important to note that silicon DNA synthesis technology and phosphoramidite chemistry are not inseparable. While phosphoramidite chemistry is the gold standard today, the properties of silicon mean that should another great breakthrough in DNA synthesis technology happen, we can easily adapt our robust commercial infrastructure to incorporate any proven technology that would improve speed, throughput and/or cost.

We have built a commercial engine to synthesize DNA to enable our customers to change the world. Already researchers are realizing the benefits of easy access to large scale DNA synthesis. For example, we are providing 1 billion base-pairs of DNA to Ginkgo Bioworks to enable their strain engineering foundry Bioworks3. In a collaboration with Microsoft Research and the University of Washington, our oligonucleotides are being used as a data storage tool. We have synthesized new custom dsDNA target capture panels for NGS, which are being used to better detect deadly viruses. Researchers have utilized our oligonucleotides to generate gRNA libraries for CRISPR experiments to better understand complex cellular processes. Additionally, we make libraries containing gene variants, from which researchers have been able to identify up to five times the amount of useful molecules compared to other library generation methods, allowing for better protein and antibody engineering. We are committed to driving the cutting edge of new discoveries for health and sustainability through our synthetic DNA.