Interview with Will (Legal) | Twist Bioscience Skip to main content 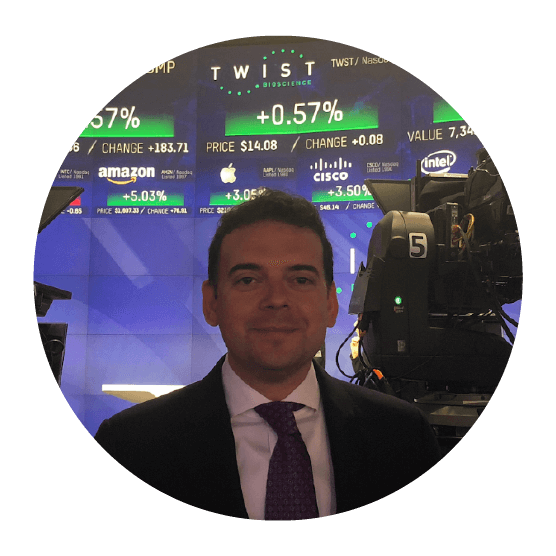 What’s your background and how did you end up at Twist?

I graduated with a biochemistry degree and worked in the pharmaceutical and material science industries for six years. I was a senior research associate for CooperVision, where I developed a new contact lens material that was eventually manufactured and sold to the public. After that, I went to law school at UC Berkeley and then to work at Morrison & Foerster. They're a big international law firm doing all types of legal work. I was focused on mergers and acquisitions, financings and capital markets work.

What do you like about Twist and your current role?

I joined Twist and immediately started working on our IPO. Being a biochemist and lawyer, Twist offered me the opportunity to utilize both of my degrees. My boss is a really nice, interesting guy and a great mentor. The work is demanding, but I feel a lot more appreciated at Twist than I ever did at the law firm. I was given a lot of responsibility here from the start, but I never feel as if I am on my own.

What is important about diversity at Twist?

Our CEO has told me many times how much she values diversity. She knows it’s more difficult, because you're going to have more conflicts with a diverse population, but she thinks it creates a better work product and I agree. She loves the different points of view. You never know who is going to come up with the best idea? On its own, diversity is just the right thing to do, but there’s a great business case as well, because it crafts a better work force and better products.

How have you navigated your career?

I credit my parents a lot. Neither of them went to college, but they were always talking about me going. That was incredibly helpful and motivating. A lot of kids have terrible stories about coming out to their parents, but I didn’t come out to them – they came out to me. By the time I was 18, they were like: We thought you'd have come out by now.

How did cultural movements impact your feeling of belonging?

As a kid, I was watching the HIV epidemic and that was extremely scary. Going into the 90s, we had don't ask, don't tell, which was actually kind of a progressive thing at the time. Before that, people were just thrown out of the military automatically.

In college, I did a lot of LGBT activism and volunteered for a number of organizations, such as a group called Bridges. With Bridges, we went to frats and sororities to educate them about LGBT issues but in a fun and open forum. In addition, during my first year, my university had an exclusive LGBT and ally living space, and I ran a gay dorm residence group. At the time we were focused on fighting don't ask, don't tell and raising awareness of LGBT discrimination.

For a long time, I never thought that we would see same sex couples get married. It just seemed like it would never happen. Then Gavin Newsom allowed the city of San Francisco to start marrying same sex couples. I went down to City Hall that first day, and there was this line around the block. There was all kinds of security, but I wanted to see what was going on inside. So, I snuck my way in, and they were having marriages in every possible area at City Hall: on the stairwells, in the grand lobby and in every little room. I could not believe it was actually happening.

I met my husband, 16 years ago, in San Francisco, about a year after I moved here. I fell in love with him the first time we met. He’s one of the smartest, funniest people I've ever met. We've been together ever since.