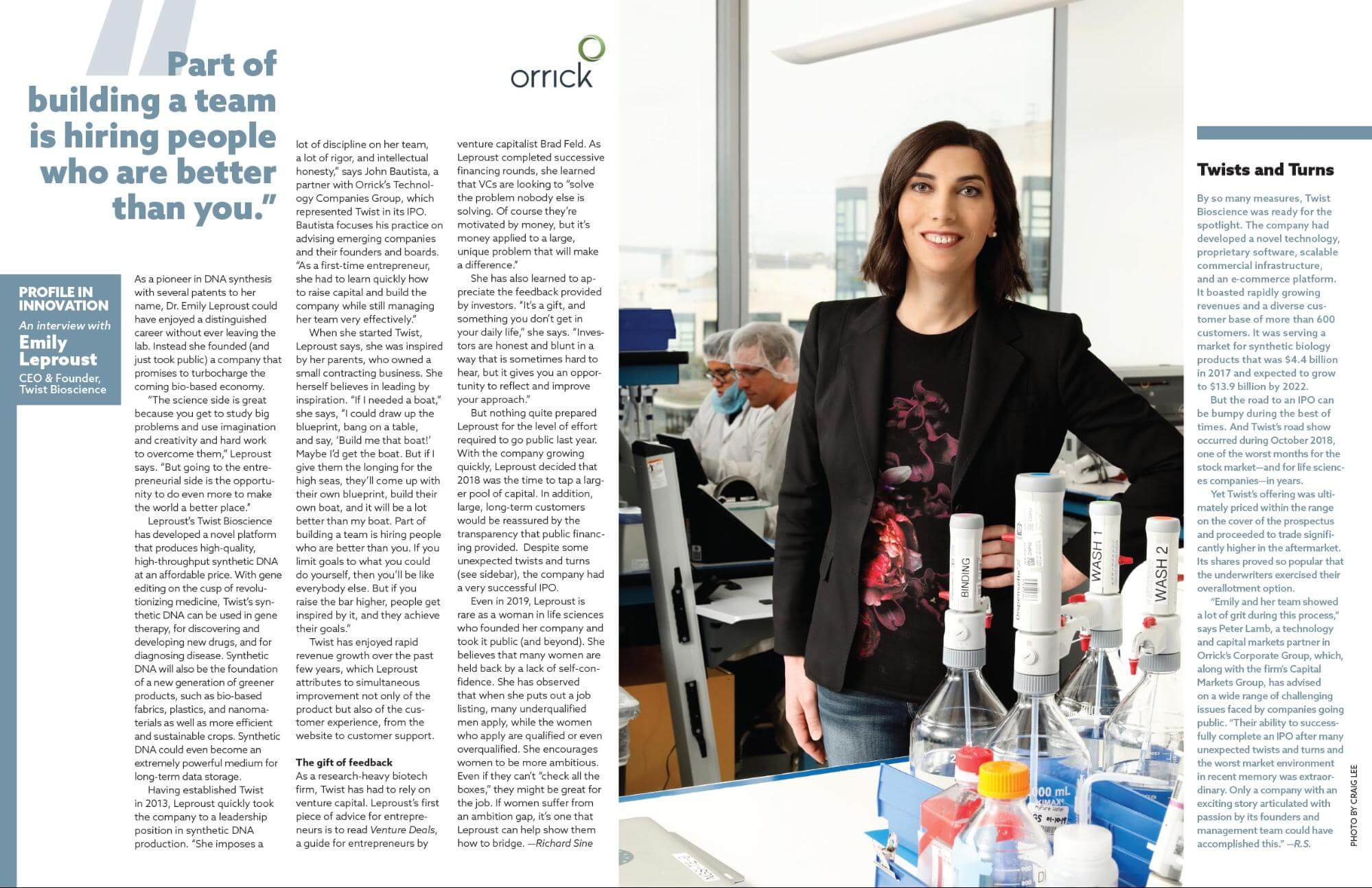 “Part of building a team is hiring people who are better than you.”

As a pioneer in DNA synthesis with several patents to her name, Dr. Emily Leproust could have enjoyed a distinguished career without ever leaving the lab. Instead she founded (and just took public) a company that promises to turbocharge the coming bio-based economy.

“The science side is great because you get to study big problems and use imagination and creativity and hard work to overcome them,” Leproust says. “But going to the entrepreneurial side is the opportunity to do even more to make the world a better place.”

Leproust’s Twist Bioscience has developed a novel platform that produces high-quality, high-throughput synthetic DNA at an affordable price. With gene editing on the cusp of revolutionizing medicine, Twist’s synthetic DNA can be used in gene therapy, for discovering and developing new drugs, and for diagnosing disease. Synthetic DNA will also be the foundation of a new generation of greener products, such as bio-based fabrics, plastics, and nanomaterials as well as more efficient and sustainable crops. Synthetic DNA could even become an extremely powerful medium for long-term data storage.

Having established Twist in 2013, Leproust quickly took the company to a leadership position in synthetic DNA production. “She imposes a lot of discipline on her team, a lot of rigor, and intellectual honesty,” says John Bautista, a partner with Orrick’s Technology Companies Group, which represented Twist in its IPO. Bautista focuses his practice on advising emerging companies and their founders and boards. “As a first-time entrepreneur, she had to learn quickly how to raise capital and build the company while still in managing her team very effectively.”

When she started Twist, Leproust says, she was inspired by her parents, who owned a small contracting business. She herself believes in leading by inspiration. “If I needed a boat,” she says, “I could draw up the blueprint, bang on a table, and say, ‘Build me that boat!’ Maybe I’d get the boat. But if I give them the longing for the high seas, they’ll come up with their own blueprint, build their own boat, and it will be a lot better than my boat. Part of building a team is hiring people who are better than you. If you limit goals to what you could do yourself, then you’ll be like everybody else. But if you raise the bar higher, people get inspired by it, and they achieve their goals.”

Twist has enjoyed rapid revenue growth over the past few years, which Leproust attributes to simultaneous improvement not only of the product but also of the customer experience, from the website to customer support.

The gift of feedback

As a research-heavy biotech firm, Twist has had to rely on venture capital. Leproust’s first piece of advice for entrepreneurs is to read Venture Deals, a guide for entrepreneurs by venture capitalist Brad Feld. As Leproust completed successive financing rounds, she learned that VCs are looking to “solve the problem nobody else is solving. Of course they’re motivated by money, but it’s money applied to a large, unique problem that will make a difference.”

She has also learned to appreciate the feedback provided by investors. “It’s a gift, and something you don’t get in your daily life,” she says. “Investors are honest

and blunt in a way that is sometimes hard to hear, but it gives you an opportunity to reflect and improve your approach.”

But nothing quite prepared Leproust for the level of effort required to go public last year. With the company growing quickly, Leproust decided that 2018 was the time to tap a larger pool of capital. In addition, large, long-term customers would be reassured by the transparency that public financing provided.  Despite some unexpected twists and turns (see sidebar), the company had a very successful IPO.

Even in 2019, Leproust is rare as a woman in life sciences who founded her company and took it public (and beyond). She believes that many women are held back by a lack of self-confidence. She has observed that when she puts out a job listing, many underqualified men apply, while the women who apply are qualified or even overqualified. She encourages women to be more ambitious. Even if they can’t “check all the boxes,” they might be great for the job. If women suffer from an ambition gap, it’s one that Leproust can help show them how to bridge. —Richard Sine

By so many measures, Twist Bioscience was ready for the spotlight. The company had developed a novel technology, proprietary software, scalable commercial infrastructure, and an e-commerce platform. It boasted rapidly growing revenues and a diverse customer base of more than 600 customers. It was serving a market for synthetic biology products that was $4.4 billion in 2017 and expected to grow to $13.9 billion by 2022.

But the road to an IPO can be bumpy during the best of times. And Twist’s road show occurred during October 2018, one of the worst months for the stock market—and for life sciences companies—in years.

Yet Twist’s offering was ultimately priced within the range on the cover of the prospectus and proceeded to trade significantly higher in the aftermarket. Its shares proved so popular that the underwriters exercised their over allotment option.

“Emily and her team showed a lot of grit during this process,” says Peter Lamb, a technology and capital markets partner in Orrick’s Corporate Group, which, along with the firm’s Capital Markets Group, has advised on a wide range of challenging issues faced by companies going public. “Their ability to successfully complete an IPO after many unexpected twists and turns and the worst market environment in recent memory was extraordinary. Only a company with an exciting story articulated with passion by its founders and management team could have accomplished this.” —R.S.